Saucony’s Xodus 6 is designed to be tough, seriously tough. With an aggressive Vibram outsole and forefoot rock plate it’s built for chewing up trails and spitting them out of its high rise lugs. With a relatively soft sole it’s particularly suited to soft ground but still transitions well to harder surfaces. A wide heel and toe contribute to an overall volume slightly above average with Pro-Lock lacing creating a snug fit. 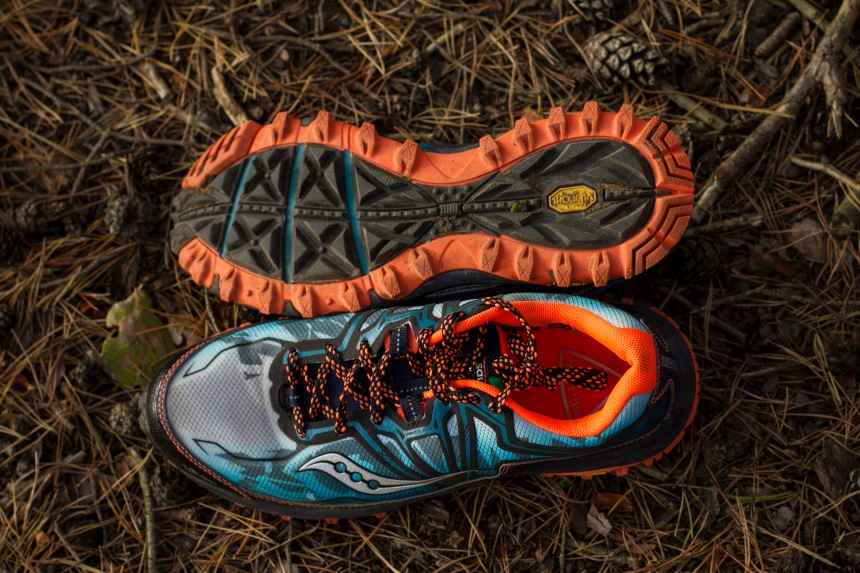 What the manufacturers say:

The ATV of trail running footwear, the Xodus 6.0 is designed to tackle the toughest of terrain while providing midfoot support and optimal traction on the trails.

I’ve been running in Saucony’s Kinvara 5 on the road since they were launched. Two pairs have been disposed of, after hundreds of miles have worn down the blown rubber outsoles and the uppers have remained strong throughout. I recently bought a pair of Kinvara 6, knowing I had a long winter of road miles ahead. Yes, like many others, I do run more road than trail miles.

When Saucony offered the new Xodus 6.0 for testing, I was interested to see could they convert their road prowess to the trail.  Given I already had an affinity to their tarmac eating Kinvara, I was also a little wary. Could this love affair with one shoe tarnish my thoughts about exploring others in the range? 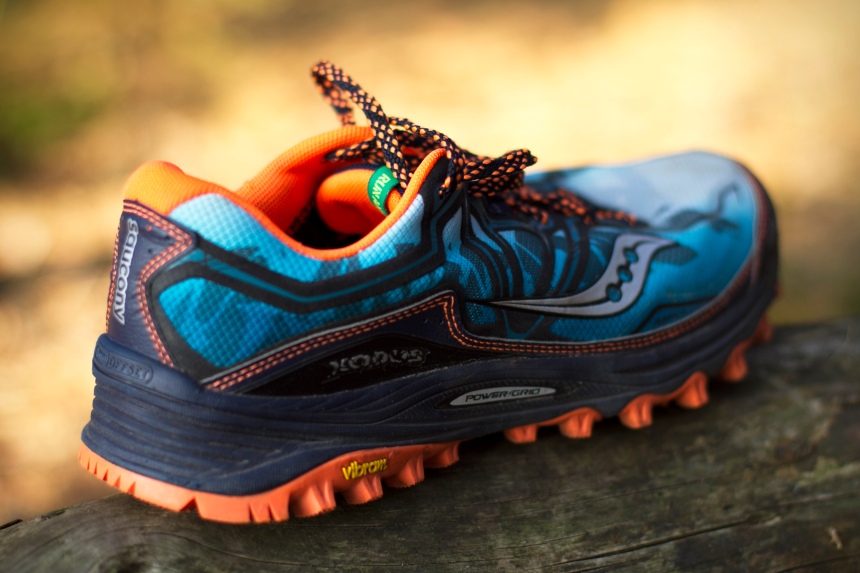 Before we get into the nitty gritty of experiences in Chamonix, Keysoe and Woburn, I must mention size. For those that have read other reviews, you may by now know I am a 9.5UK men’s and opt for a 10 when going off-road. Having tried the Saucony Peregrine when I was fitted for my Kinvara’s by Profeet of Fulham, a 9.5UK was spot on. So I took the gamble. The one other occasion I have done so, it did not pay off. I was apprehensive!

When the courier knocked on my door and handed me the box, it could have been game over before putting tension on a lace. To my relief they fit. They ran true. In my opinion they are the only shoe I have hit the trail on that I would say are  true to size. Of course this comes with three warnings. One, even though I am a 9.5UK men’s I am sure I am not text book. Two, brands vary in size within their own ranges, let alone between opposing rivals. Three, even if our feet measure the same, they are different depths, widths and what feels good for me, may not feel good for you.

So that nitty gritty stuff I mentioned…….

I was sent the Xodus 6.0 in time for my Chamonix trip. No better place to test out a trail shoe (answers on a postcard for other must run areas). With trails everywhere the eye can see, it meant a perfect testing ground.

The week had two elements, running and walking. After all, many of us spend hours walking around day to day in trail shoes. The last thing you want is a shoe that wears down like you’re moving over a cheese grater if you pop into a corner shop for milk.

The first thing that strikes the eye is the outsole. As mine were the blue/orange colourway, the aggressive orange lugs captivate your eye. Spread out around the outer edge, the deep lugs are made to bite into the crud when turning corners or leaning on cambered sections. The remainder of the Vibram outsole is less aggressive, with an X pattern and gives plenty of surface area to contact the trails. Aimed at trails, these aren’t an out an out mud shoe, however as the water splash at Keysoe XC proved, they can deal with moderate slop well. Vibram have provided a hardwearing sole, which is great for getting on and off trail. Seldom are we able to run 10 mile of trails without at least starting and ending on tarmac.

I took the Xodus 6.0 up to Refuge de la Flegere from Les Bosson. A total of 1000 meters climbed, before reversing the route to make a 13.6 mile run. The trail had a mixture of loose rock, mud, hard pack and tree foliage. All the while on a twisty single-track , with a drop of 100+ feet of so on my side at times.  They gripped, and gripped well. I never once lost my footing or worried about placing my foot in any direction. On the one occasion I under estimated my line and veered to the edge, they held true, whilst my arms flailed to keep my balanced and stop me taking a tumble into the valley. Trust me I have the GoPro footage for that one…..

The External Bedrock Outsole of EBO in the forefoot kept anything sharp at bay. I never winched as I descended onto rocks and it kept my foot protected. As can often be the way with protection, it runs the risk of deadening the sensation underfoot and you can loose that connection with the ground. I wouldn’t say the EBO does. I still had enough feel, as I know I wouldn’t have descended as quickly as I had if not.

Above the outsole and EBO, you will find the Powergrid™ midsole. With 20% more cushioning than a regular midsole, this is definitely designed for longer runs. The Powergrid™ is deigned to absorb energy and dissipate pressure, whilst centering the foot. The result, a smooth ride, whilst returning energy to the runner.  Does it work? Yes. On the hours I spent in the Chamonix valley I never felt heavy underfoot and when taking part in an all out 6 mile XC assault, knew that the more I put in the more I would get out. Kick and the shoe will kick with you.

With a purposeful platform of an aggressive outsole and responsive midsole, there is a 4mm offset (23.5mm heel/19.5mm forefoot), aimed at a natural gait. This may be the downfall for some who are used to a higher stack height and therefore haven’t developed the muscles and gait to maximize this. Having used the Kinvara for a couple of years, I have worked towards using a 4mm drop up to marathon distance. However, with the support the shoe provides, I believe people who are used to a higher stack may be able to transition smoothly – even if for shorter distances initially.

The shoe is neutral, with a little pronation support offered.  With the nature of trail running this is less of an issue as your foot will constantly landing on different level.  As a predominantly neutral runner, with a small level of pronation in my right side, they offered good support for me. 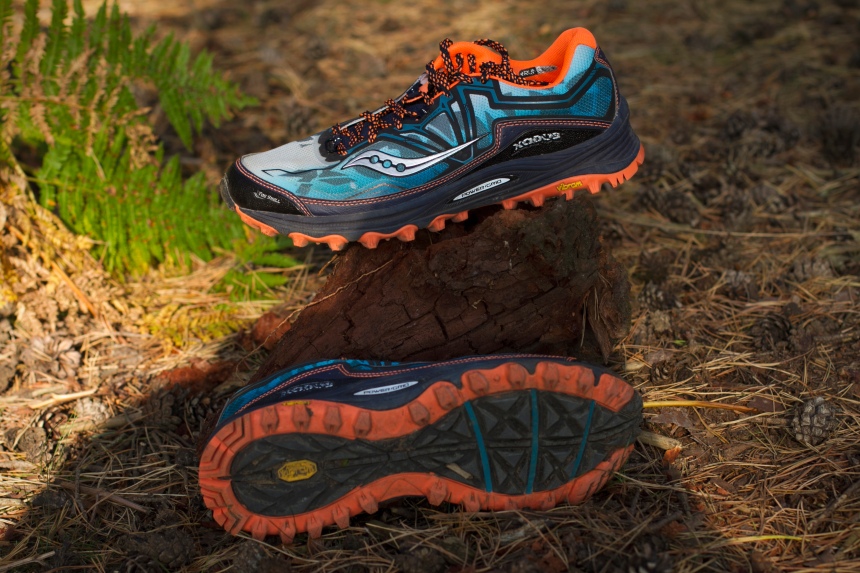 The Toe Shell, the rand at the front of the shoe, protected well from any over eager descents or brushes with rocks when my foot placement was far from elegant. Furthermore, it has held up well. For someone who only weighs 73kg, I put shoes through hell and these look fresh despite some 50 odd miles in them. 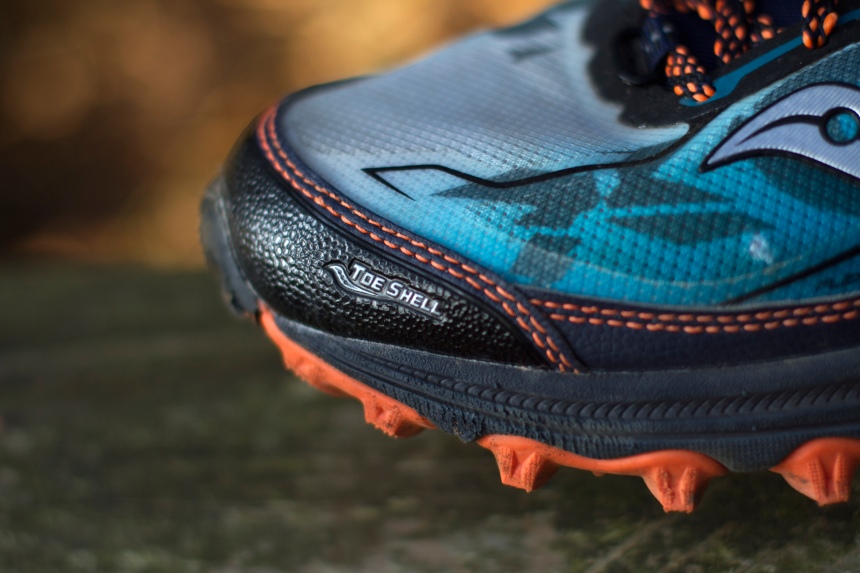 A Flexfilm upper keeps debris out well, but did suffer a small tear early on. Perhaps given its tough nature, rocks or what ever ripped it found it easier to snag a thread. Despite this, when on, it is soft around the foot, breaths well and enables a close and comfortable fit.

Heading upwards, the ProLock lacing system is a gem. With a band running either side from the outsole to the tongue, it locks the upper down well. So much so, you have the ability to custom the top two eyelets for comfort, whilst in the knowledge the remainder of the lace is secured. It allows for a real custom fit. Yes, you may spend a minute or so sorting it out to your preference, but you do so in the knowledge, once it’s done you are good to go for as long as you want. 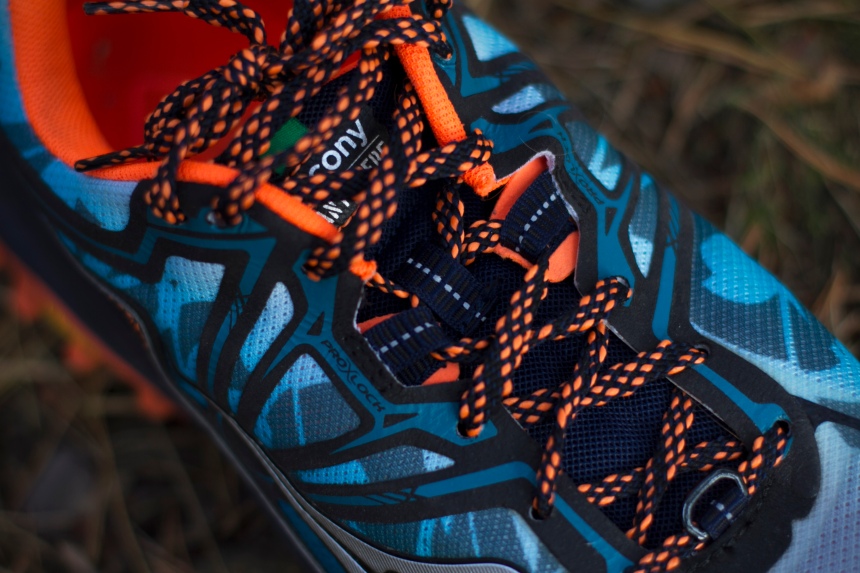 Finally the heel cup is supportive and holds your foot securely once the Prolock has been tensioned. It is not too high and stays hugging your ankle despite the best efforts of off camber descents down rock laden trails.

So where does this put the Saucony Xodus 6.0?

I was apprehensive at first given my affinity to the road range and wondered if this would convert to the trail. However, I was proven that this anxiety was ill founded. Saucony have built a solid shoe, with a great level of grip and protection, whilst managing to persevere trail feel. I could and have been able to run any distance I want in them.  I even found myself running the first round of the Chiltern’s Cross Country league in them at the weekend. I haven’t had spikes since I was a kid and needed something that would run fast and grip to all manner of terrain.

Room for improvement? They are a little on the heavy side at 323 grams and you notice this most when they get wet. But there is a but. For the longevity, support and grip I can see where the weight has come from. You could easily take this on a multi day race and know they will stand up to what ever punishment you throw at them. They also can do all that on a variety of trail surfaces. The styling is pretty out there (I’ve recently become a sucker for bolder colours), but they come in two options for that very reason. Subtle or “I am a trail runner!”

To summarise, the Saucony Xodus 6.0 is a beast of a shoe. It rides well, protects against the worst and will carry you for mile after mile on trails.