It’s been a while since I’ve run in the mountains. The last time the rubber outsole of my shoes touched rock was at the Salomon Ring of Steall, some 6 or more weeks previously.

I ran in anger. Pressurised. It was a race after all.

There would be no fanfare, no aid station, competitors or marked course.

Starting in Elterwater, I retraced part of the Lakeland 50 course, to the mouth of Stickle Ghyll. Broad, winding farm tracks, hard packed under heavy machinery, it was almost like road running; if not for the cattle grids and gates.

Starring up at the colossal face of Pavey Ark and Harrison Stickle, my ascent began, working around sheep, sodden trail and ice.

As I was soon to discover, the first visual signs of winter were setting in. Whereas the Langdale Valley was awash with trees displaying all manner of brown, orange and autumnal tones, the flanks of the fells bear no fruits. Sheet ice started at around 300-400 meters, through few and far between at first. As things got higher, a change was all too clear.

Stood beneath the buttress stooping over Stickle Tarn, I decided to explore new territory and the east flank of Pavey Ark.

Ice covered bogs and mud led to a scrambling ascent, where cold hands met cooler yet grippy rock. Moisture was absent, aiding the ascent. Glimmers of white shone around as sun tore threw the thick cloak of cloud, for short spots. 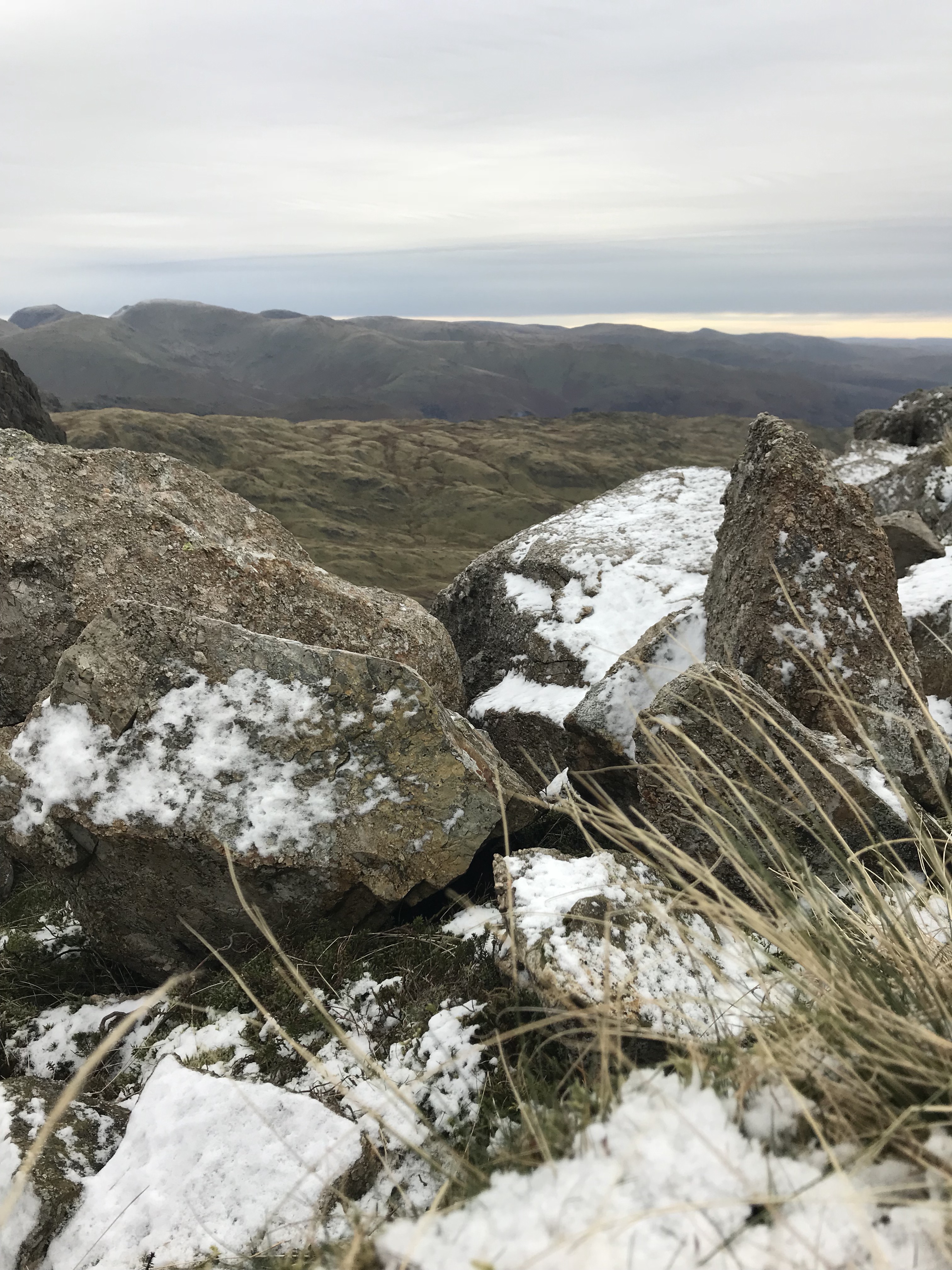 Fresh snow greeted the saddle between Pavey and Harrison, a reminder of where the season was progressing. Despite all the conditions thrown at them, the Adidas Terrex X-King, with their Continental compound and mtb tread clawed the available terrain. Sticking to rock like a climbing shoe and handling off piste running well. Deeper lugs would have been the cherry to the descent. 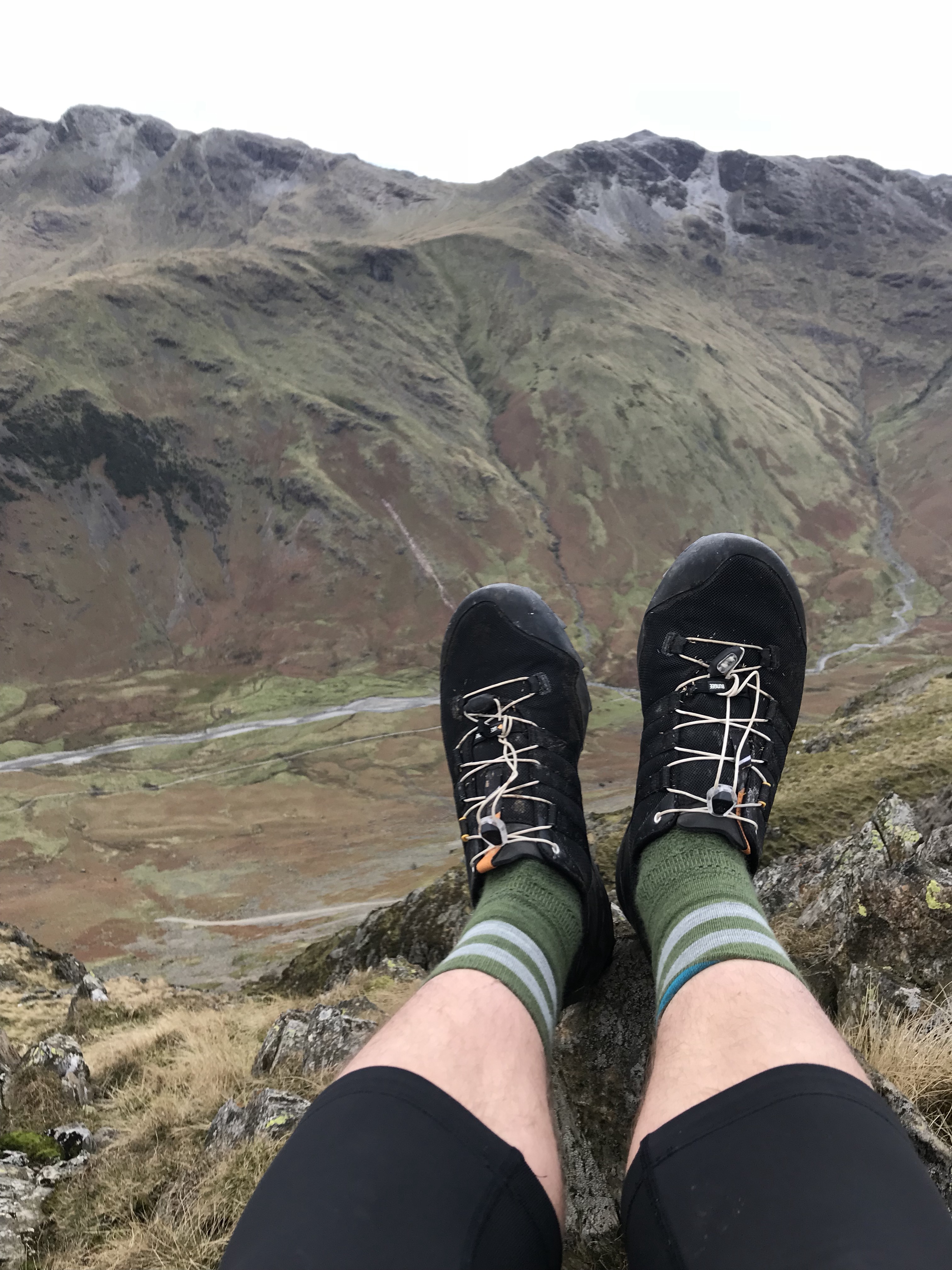 The overwhelming observation was silence. Not another being stood on the mountain, the lack of noise was almost deafening. I live in a village and yet I was taken aback by the peace. We could all benefit more from detaching from modern day life.

Looking across at faces holding a light dusting of the white stuff, the fact I was in a long sleeve top and 3/4 tights, was remarkable.

Ticking off Pike of Stickle, it was time to return to base and have some much deserved breakfast.

12 Miles, 900 meters of climbing & a true fell running experience. I may not be in mountain shape, but it was great to be back in the high country (as the UK goes) and giving my legs a test.

See below for a short video

This ones taken a while - 5 running packs reviewed! In a shake up from the normal format, I’ve launched my YouTube videos first & the images/words will follow soon on the website Why? Because there’s 5 packs, all very different yet all linked in this test & my rambling mouth, combined with moving images (I do go on a bit) has greater prominence & context this time around On review.... . @uswesports Pace 12 @camelbak Nano @ultimatedirectionusa Halo @salomonrunning Agile 2 @inov_8 Race Ultra Pro 2-in-1 So make yourself a drink, perhaps a main course.... there’s a grand slam of 6 different videos up for grabs, all via the bio #runningvests #newreview #trailandultra #thatshirt
Dennis blew me hard I often find it hard to get out the front door, the lack of elevation & trails pushing me more often than not the roads. Sure we have trails, footpaths and bridleways tracking over fields, that outside of summer consume shoes within a few strides, pulling them into the brown abyss below.... It’s also pancake flat here What ‘proper trails’ we do have are good fun, but there’s only so many times you can weave around them before the sand beneath your feet becomes a tyrant of its own, sapping the life from legs The local road network is strong, with Milton Keynes offering a labyrinth of custom built paths, great for those looking to knock out consistent splits But where things are flat, the winds are fierce. There isn’t a need to find elevation to get assaulted by nature, leaning into a side wind, hell bent of ejecting torso & limbs onto asphalt It’s been a while since a jacket inflated due the severity and consistency. Where the hedgerows were low, all hell broke loose. Water from cars, launched into the atmosphere by tyres glided across both lanes, some 8 feet in the air, locked onto me like a precision munition. Seldom did it miss. Round 2 today 😉 . #teampyllon #stormdennis #roadrunning #sonyrx100m3
The phone camera - so simple, yet complexing to many. Based on @ultra_damo facial expression..... . Off the back of Damian’s record breaking Winter Paddy Buckley Round, where as well as running unsupported - carrying everything he would need to eat/wear for the entire duration (standard round practice is to amass a team to carry your kit & navigate) - Damian took alternate methods of transport, relied on his wife’s home cooking & planned the trip in the style he’ll be conducting training/racing in 2020 I’d be lying if I said I sat down with Damo & asked questions, so instead, we utilised the wonder that is the World Wide Web to exchange emails So modern If you’d like to read about his round, why he ran unsupported, a fuel choice many im sure will envy & the perils of getting too comfortable on public transport - I’ve put the link up above in my bio 👆🏻 . . #paddybuckleyround #mindfulrunning #inov8
Time to talk My appearance may change, my interests alter, motivation levels fluctuate & my ability to look deep within myself grind to a halt But the narrative is constant We need to talk, we must talk for our own & others mental health to remain healthy. It’s all too easy to hide behind a face, a persona, built to cope with the complexities of modern day life & the infinite stimuli we are exposed to throughout every minute, of every day This smile disguises & withholds a multitude of life’s challenges, which over years of experience, counselling & adaptations have been dealt with or suppressed They will be with me for life, but that’s not a negative, it’s what has built me to be the person I am However, the past doesn’t lie dormant forever & feeling able to talk to others, to disclose aids dealing with such challenges when they flair up I can say from my own experience, you have no idea how powerful checking in with someone or simply being willing to listen without judgment is This is one day, let’s make it everyday Image from December 2018 #timetotalkday #timetotalk #mentalhealthawareness #teampyllon
What a day @kong_mini_mountain_marathon Round 1 had it all Bogs, lots of bogs, deep bogs, shallow bogs, hidden bogs & just when you thought you’d stepped in them all....more bogs But wait, there’s more..... cutting winds that blew you across the mountain, limited vis to disorientate, rock greasier then your local cafe & a series of hidden checkpoints Points win prizes & by the narrowest of margins @snoobydoobydoo & I took the mixed pairs 👑 - a good thing we hammered the last mile or so of footpath to the finish or we’d have lost it with a greater time penalty It may have taken a couple of years, but finally got to run with Katie, as when we do cross paths she’s mountain safety at races while im happy snapping Now if someone could tell my hamstrings & glutes to relax, I’ll be forever in your debt, the 4 hour drive after soup & cake at the finish has angered them 🤦🏼‍♂️ . #minimountainmarathon #walesneverfails #teampyllon
White shoes x Winter roads #ad #onrunning #roadrunning
Overwatch I’ve bleated on enough about the frustration that was my personal running in 2019, how this frustration only compounded the situation. It was a mental, rather than physical block But Paul stood by me I’ve never been the most consistent at training, I’m sure the red bars of training peaks glow vividly But it’s more than simply training & getting stronger Paul’s been a mentor, a friend, the head of a community, someone who’s checked in on me, my running & mental state of my mind for the past few years He’s been the consistent one With some big races including Old County Tops & @type2events Fun Run this year, it’s time to knuckle down & get the legs working Lucky to work with him & more over call Paul a friend #teampyllon #mentor
That time @trashfreetrails hung out at @kendalmountainfestival Basecamp Words & snaps 📸 in bio #trashfreetrails #packitinpackitout #environmentalactivists
This time last week, heading home from a big day with @trashfreetrails x @vodafoneuk Looking forward to the short coming out in Feb - keep those 👀 peeled for the release #trashfreetrails #jointhetrashmob #packitinpackitout #trailcommunity