Who knew Thursday nights, were the new Fridays? If you don’t believe me, go tell the sold out crowd of Harvey Maps Fell Running Session, held in the theatre of the Brewery Arts Centre.

Following on from the success of the inaugural night in 2017, the Fell Running session (in my opinion) may be the best session to attend, given the broad spectrum of speakers, light hearted atmosphere and for those local, constant digs and jokes between the local clubs – Keswick AC, I’m saying nothing about your navigation…. 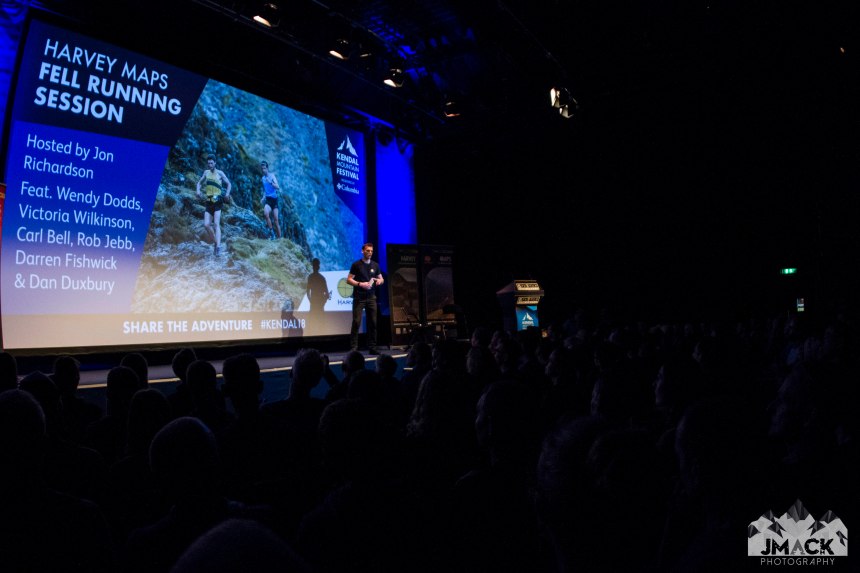 Once again MC’d by Jon Richardson, passion and true love for the sport’s culture and community was projected to the very back row. Full of whit and one liners, in many respects, Jon was as a speaker in his own right.

Now, I must confess, I am not from the fell running community, based in the flatlands of Milton Keynes and only able to make a trip up to the fells every few months, so my knowledge of the individuals in the sport are limited, beyond those prominent on social media or race coverage in recent years. However, when an introduction starts with “Stand up if you’ve been Dodded”, it speaks volumes for what is to come.

And with that, a large number stood up. 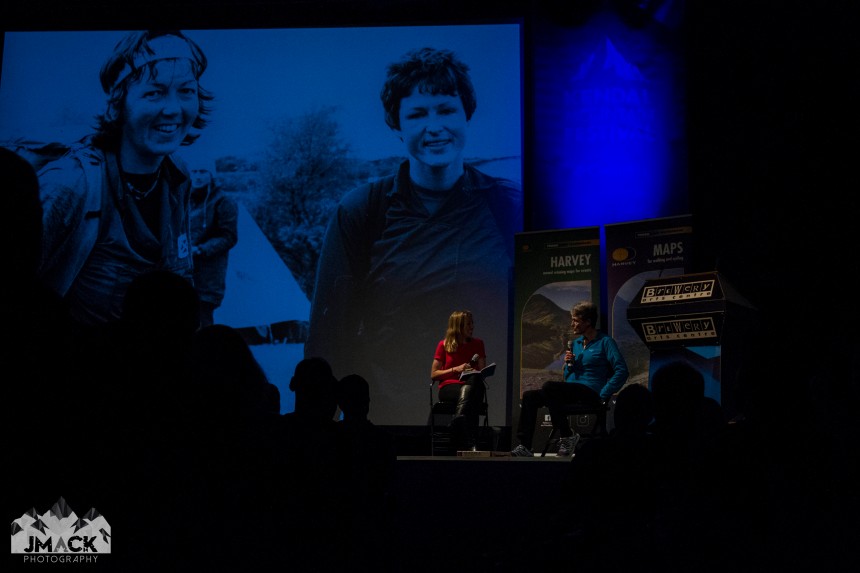 Wendy Dodds, fell running legend and royalty, beyond 60 took on a feat that still numbers below 50 for completion, the Frog Graham, with a time of 15 hours and 52 minutes. It should be pointed out that for a moment, Wendy had considered a winter round, but that thought was short lived…. thankfully. Plans began to made in September last year, and in the 10 days leading up to her round, swam Bassenthwaite, Crummock and Buttermere. Opting to wear a swim run wetsuit throughout, she feels around 45 minutes were saved through not having transitions (getting in/out of the suit). Yet, the biggest fear was Derwent water, the longest stretch swimming, 1 mile, broken up by 3 small islands. Given it’s size, depth and the time spent in the water, the cold temperature was a concern. 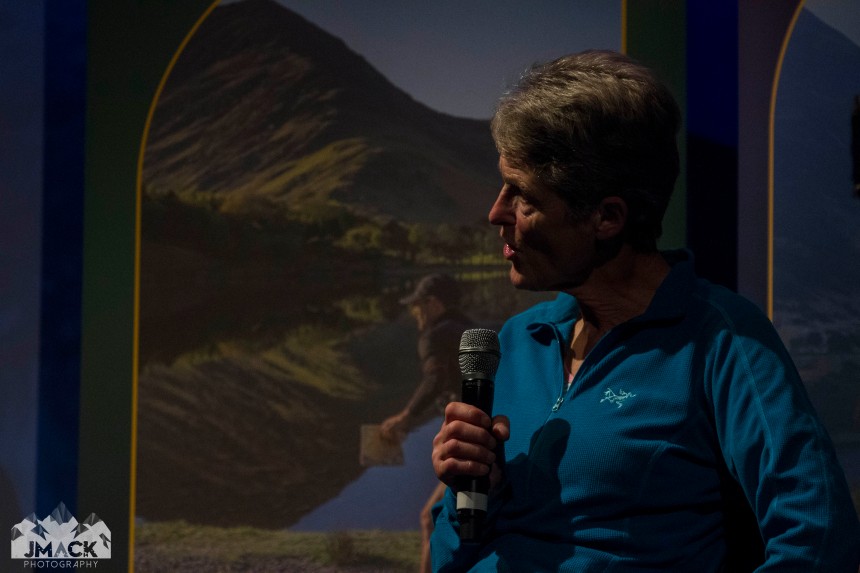 Despite all this, and I quote “it’s easier then the Bob Graham, even if you’re not a good swimmer.”

To give you an idea of Wendy’s mental fortitude, she climbed the Matterhorn on a Monday, Mont Blanc on the following Friday and returned for a fell race that same weekend. In the build up up to climbing the Matterhorn, she broke her leg on the Cosmic Arete with a guide, when her crampon was trapped in-between rocks and her body carried on moving forward. 10 days after breaking the leg (I should add they carried on the climb, seeking medical attention the following day), Wendy was swimming, and competing at an English Championship Fell Race 8 weeks on from the accident.

But what is next for the queen of the fells? Consolidating 4000 meter peaks, ski touring and fell running.

How do I climber better ?
“Do a lot of ascent – work hard at it”

Descending?
“Be Fearless, Practice, Feet on the ground as little as possible”

That time on SAS selection (BBC programme)
“The interrogation wasn’t so bad
The rest was easy, it was the military side which I failed on.”

Holder of the Frog Graham record, 11 hours 52 minutes, Dan Duxbuy had been wanting to do something different, it appealed to him. There is no time limit like the Bob Graham and is “Old county tops, plus an hour or two, plus some swimming.”

A humble man, he was quick to point out that a really good fell runner could knock the time below 10 hours. Without me recalling the film, I urge you to watch the film below, shot on his record breaking day out.

The Fishwick Chronicles – there is little I can say to capture the tale that Darren cast over the audience, recalling his build up the his Bob Graham round, the stories, anecdotes, quirky moments and above all, humour the that shone through. For anyone watching, his voice projected like a man publicly speaking for a living, utilising timing, expression and language in a concoction that left those in attendance in tears of laughter. 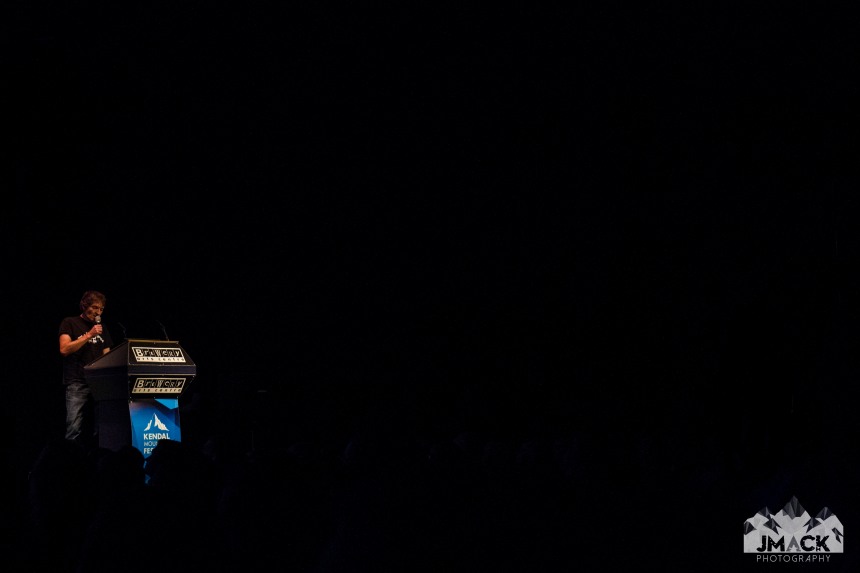 Below are some quotes, notes and stats from his talk and Q&A. The Fell Running community truly has a wordsmith and as Jon quickly pointed out “are there any publishers in the room?”

Top tips from his Bob Graham.

“Apply Vaseline – if you need to go on BG, it slips out easy. But, be careful when applying, it slips in easy too.”

The day after his BG

All of the above was thought plausible, given Darren has raced 3 Fell races in one day before.

A week later (after Bob Graham Round) it’s Kentmere Fell race, told wife I wouldn’t. If I race and complain about aches and pains, I will not get any sympathy from wife.

“I enjoy racing in inclement weather – If your moving it’s not cold, it’s fun.”

Q – Have you ever been nodded?  More than once

Q – Favourite race? Tour of Pendle Fell Race, its the first big fell race I did. 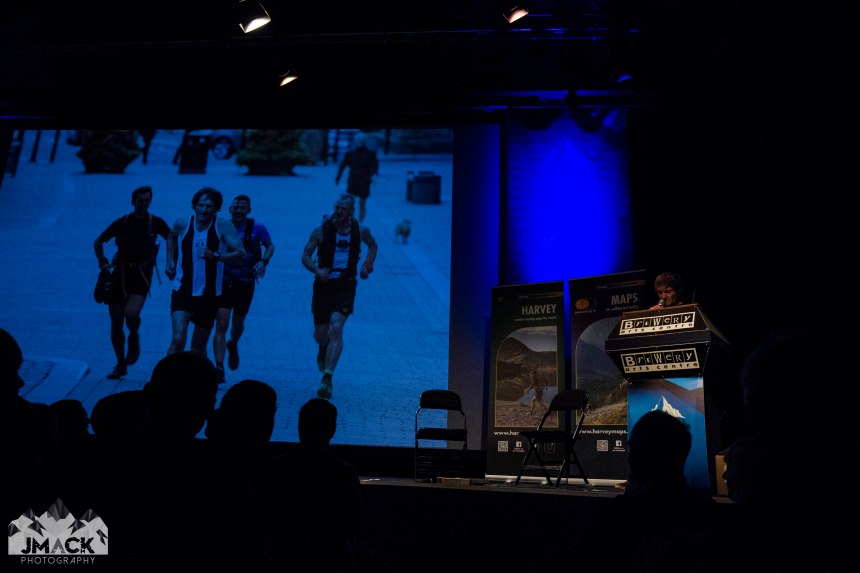 The quiz made a comeback for 2018 – name that fell race – as ever, as the maps progressed the same people shouted the same answers, until finally they scored lucky. 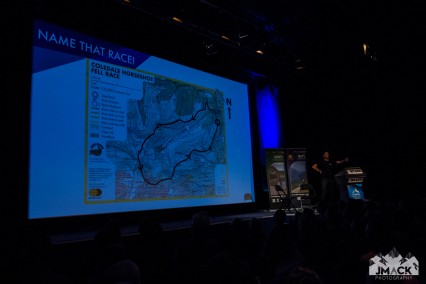 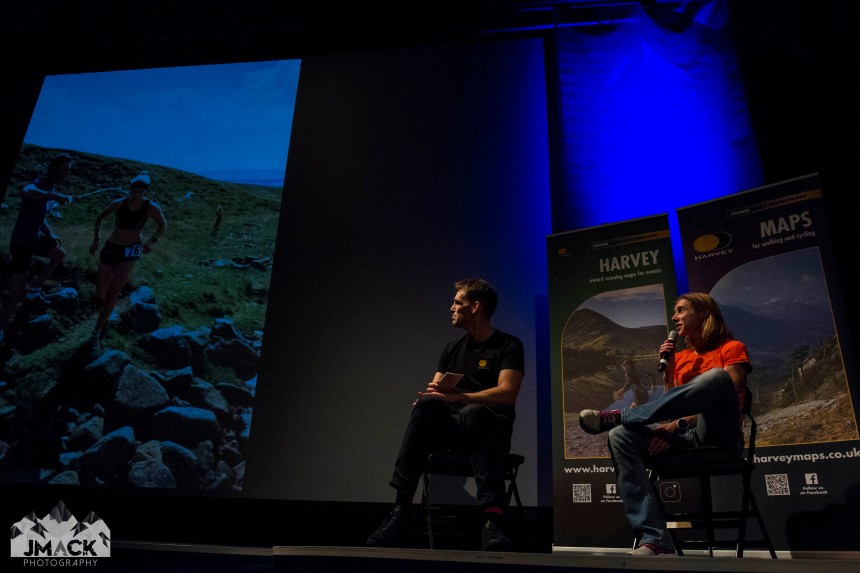 From a junior her father encouraged her to run and into university her training used to be very structured, key sessions on Tuesday, Thursday and Saturday, every week, no let up. However, now training revolved around working life and it is fit in as and when. The workload and stimuli are still there, but more is taken into account when planning her time on feet. Interestingly, as with an increasing number of mountain runners, Victoria gauges her training by time and intensity, rather then miles.

When asked about going faster, the response was resolute “you can always go faster.” It was also pointed to that you can’t guarantee any result, even when training has gone to plan as “Course, weather, build up, no injuries – all got to be good.” 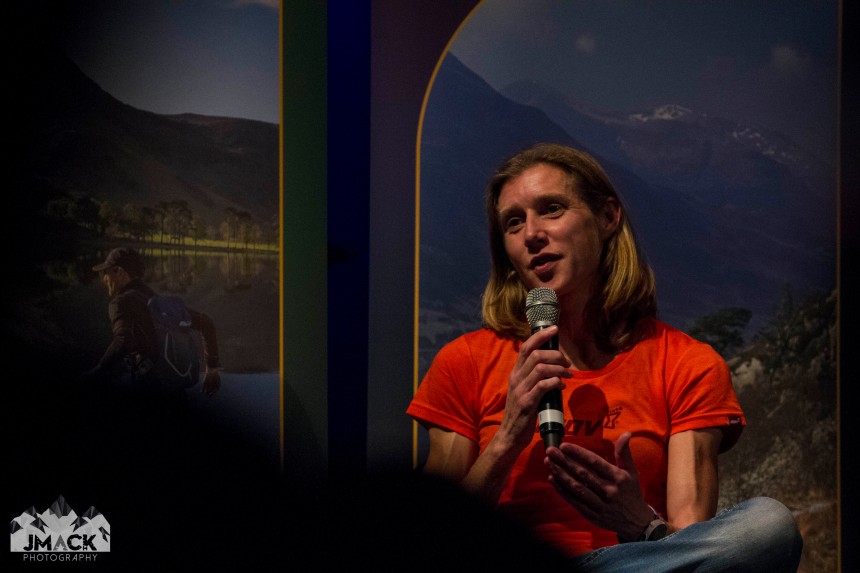 On experience – “You learn a lot. You have to learn by your mistakes. It’s fine to make mistakes, got to not make it again.” 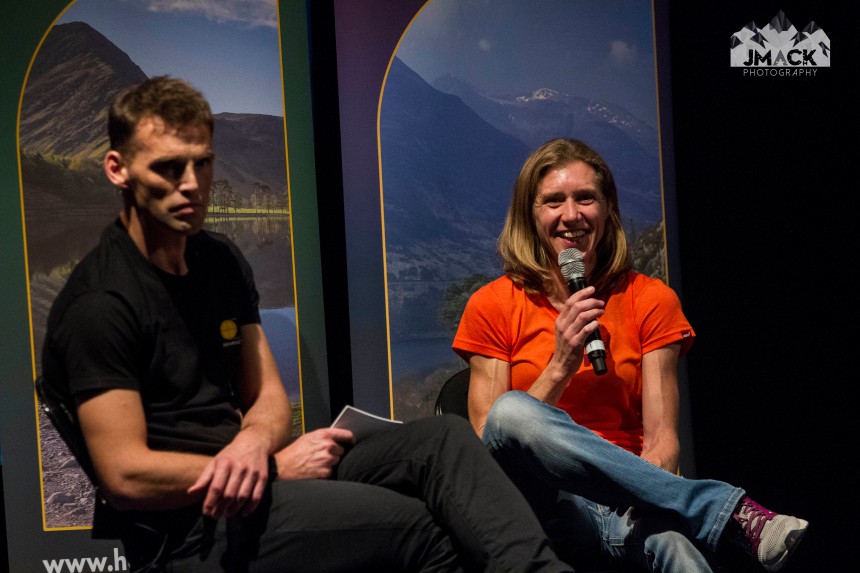 It was interesting to hear what Victoria’s greatest successes were to her.
Winning world juniors and the 3 Peaks record, as lots of planning and recces on course went it to it. She knew her splits, efforts and what it would take. When asked about the Ben Nevis record, it felt different. The plan had been to “go run it, go enjoy it, see what you can do, keep upright.” By the sounds of it, the record wasn’t the main goal or a strong motivational factor, which shows the correlation between effort and reward.

Have you ever been Dodded? “3 years ago”  when a distinctive voice projected from the audience “4 years!” as Wendy Dodds corrected.
Kilian Jornet’s Bob Graham Round

Unfortunately the Catalonian was unable to make Kendal Mountain Festival, as he is currently on world tour, however, he had prerecorded a message to the audience and thanked everyone for their support.

However, a late addition to the Fell Running Session, everyone in attendance was treated to the World Premiere of his new film Bob Graham, which follows the build up and record breaking effort it took him to break Billy Bland’s 36 year old record. The film was low key, showing the equipment used, the reason for running and of course, footage from the day itself. It was no Salomon Running TV affair, and showed that the crowds that were present at the end of the day were not an intention, rather a bi product of his international fame.

A panel of Billy Bland, Rob Jebb Carl Bell and Martin Stone, led by Shane Ohly were there to answer questions and give greater insight into the round, which has gained international press recognition and rustled feathers within the fell running community.

What came across, was Kilian’s round wasn’t for camera’s, titles or sponsors, but for Kilian himself. In the week leading up to it, he recce’d the route, and outside of the week we are all aware of, was a year or so in the making. The attempt was kept as quiet as possible, to avoid attention and it was in a shock to see Keswick with 1000 or so bodies, waiting to see him finish. 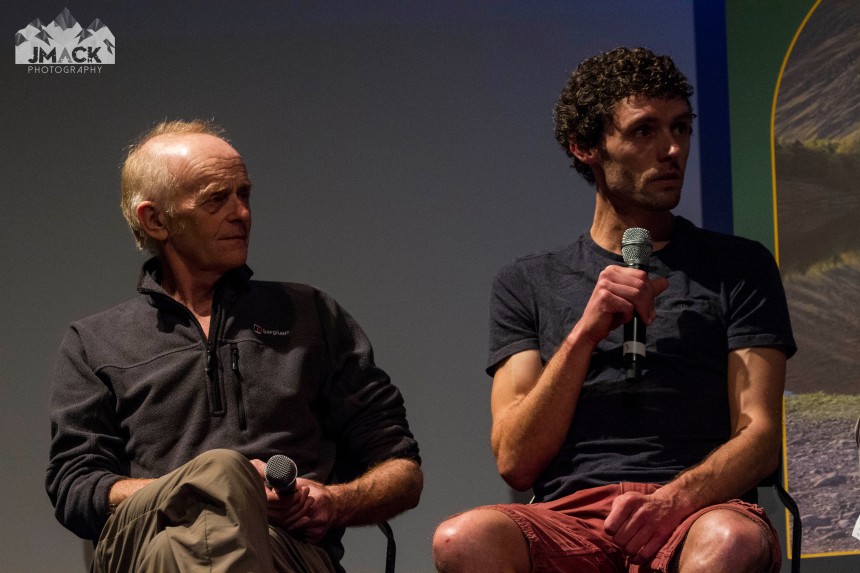 Billy Bland
“Never mind where he comes from, he is one of us.”

With man questions about people travelling from other areas of the world to take on the round, the media they may bring, the support required, it was fitting to hear Billy speak these true words. However he did tell Kilian “Don’t bring your poles, other wise you know what people will say,  he’s made us all look crap.”

Carl didn’t know the leg well and in that week, had to quickly learn the route. As he ran the first leg, no one was about, there was no fanfare “just me & the best mountain runner in the world .”

Much has been said about Rob’s team of pacers online and with expression and context removed, it came across more negative then the reality. In fact, Rob had met Kilian some 11 years prior, testing shoes with him in Marseille.

“I was always going to help him”

Much like Carl voiced, Kilian wants to chat about life, the mountains, but, as soon as they got to Bowfell, all of a sudden, it turned into a race. Flying over the ground, up to Scafell, Rob recounts he has never ran up there so quick. Dropping down into Wasdale, he told Kilian this is the best water you will ever have. Kilian took a dip and a sip “ooo Rob you are right.” 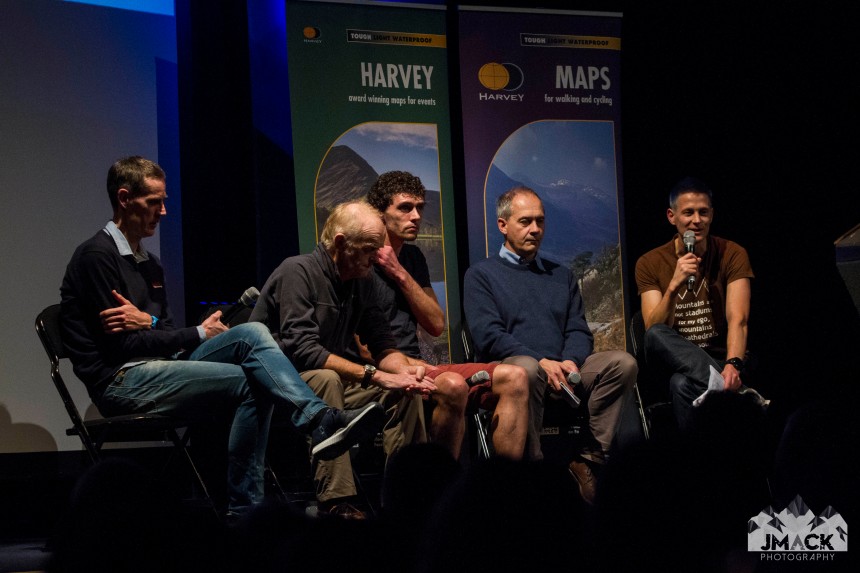 Now, it is hard to capture the essence of sessions. They are long, the topics are varied, and in many ways they are “you had to be there” moments, as unlike movies which can be replayed time and time again, you can’t.

I hope I have delivered a taster of what happened last night at the Harvey Maps Fell Running Session. The fell running session is evolving into a headline slot at the festival, one that sells out, despite being on the very start of the weekend.

Thank you to Paul Scully for the invite, I thought last year couldn’t be topped, but this year (Darren Fishwick you may be the deciding factor) was even better.

If you missed out on tickets and want to experience more running in the mountains, don’t forget there are tickets availalbe for Saturday’s Mountain Running Session.

To the volunteers
In the land of tall wooden structures, canopies swaying in the turbulence above
More than words
104
I cried
Groups runs are where the funs at
Bright Blue Back
A grand day out with a bunch of epic humans
Volunteering is flipping fun (pun intended)