My feet are on fire! Much like the original S/LAB Sonic, the Speedcross 5 are in your face red, there’s no hiding from it. However, unlike their road siblings other colours are available. I know a percentage of you just sighed in relief.

Having purchased the Speedcross 3 as my first pair of Salomon shoes many moons ago and testing the Speedcross Pro a few years back, this isn’t my first time in one of the brand’s most iconic shoes. In fact, if you remove the S-/LAB division, I would take a stab at saying these are the most recognisable Salomon running shoe across the wider community, breaking out of running. How many people have you seen on the high street wearing them as a shoe for walking the dog, going to the shops etc?

If there were two Salomon shoes I would recommend for those starting out on trails, it would be the Sense Ride and Speedcross. The Sense Ride, due to suiting city to trail runs, handling tarmac and trail with ease and providing a comfortable platform for any distance of run. The Speedcross, as it can handle pretty much anything you are likely to throw in its path. Yes, if you wanted to take on the Ring of Steall Skyrace or fell based runs, the Speed 2 has a better outsole for those conditions, but lets face it, we’re now getting pretty extreme for the UK.

Salomon categorise the Speedcross 5 for heel strikers. Well, that’s a little tricky, as on the whole I’m on my forefoot….. however, don’t flick to another website, I ran 70-80 miles in the red devils and these aren’t reserved only for those who like to lead with their heel.

A 10mm heel drop, gives a considerable wedge to run on. Typically, I run in 6-4mm drop shoes, however, I do also run in 8mm from time to time. In my eyes, if I’m headed out for a relaxed run, a long run, anything I’m not likely to be attacking, it provides me with a platform to relax on. The Energy+ Cell in the midsole is designed to provide energy return with every strike, in order to propel you down the trail, while offering cushioning and support in abundance. And cushion it has. Don’t get me wrong, this is not comparable to a maximal cushioned shoe, where you run on marshmallows and the terrain beneath the outsole lugs in completely numb. The cushion in the Speedcross 5 protects your heel if and when you strike with it, as well as offering lesser cushion from the arch to forefoot. Hit some technical trails and your feet aren’t about to go 12 rounds with Mike Tyson…..and we all know the world’s best were lucky to last one! 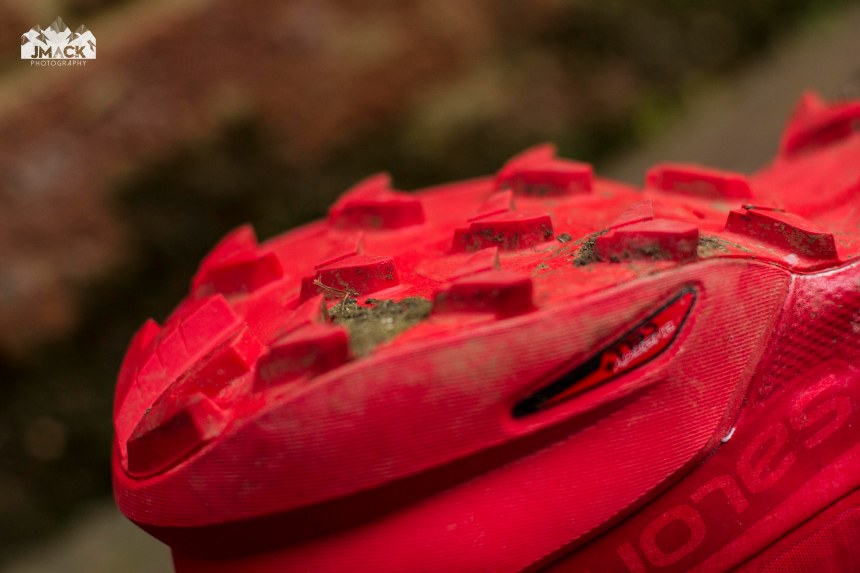 Given the trails have been very dry of late, with this blistering hot summer, the cushion has been utilised more often than not, at times trails feeling like roads. It’s a precise cushion, the best way of describing it, you know it’s there, but the tune of the resistance it provides works seamlessly with the shoe. You can connect to the land beneath you just enough. This is extremely important, give the lugs are pretty aggressive. As stated earlier, they are no Speed 2, but, they will get you through, up and over most terrain you are likely to encounter. The lugs are larger and broader than before. I felt this, simply due to the fact the lugs weren’t as noticeable as before. Aggressive lugs, when the trail isn’t sodden can be a pain, they don’t track with the land and work against the cushion at times. The broader, wider lugs, increase their surface area, in doing so, make the outsole feel more like a less aggressive version. They are more comfortable on harder terrain and work much better on roads. But, but, but, don’t go thinking they’ve lost their bite. Don’t be so foolish!

At the centre of each lug is a sip, this central channel allows the lug to compress easier, moulding to the shape of the terrain it contacts. For anyone who rides mountain bikes, you are used to seeing this on tyres, to help them have extra bite. It’s a small detail, but one which makes a big difference.

Contragrip makes up the entire outsole and provides reliable traction. In my YouTube video below, I do say it is not the grippiest of compounds, and you will find the Contragrip compound used on the Sense 6 SoftGround is stickier, but consequently, wears down quicker. What the Speedcross 5 provides in return is durability. The lugs will last a lot longer, survive roads and hard trail runs and cover much greater miles. I’d wear the Sense 6 SG on the most extreme terrain, where out right traction is my number on priority, whereas the Speedcross 5 is that do it all shoe that doesn’t excel is any particular area, but will happily run with you anywhere you take it like a trail dog.

The heel cup is a beast and looks you in. Thankfully, it’s not overly padded and has proven to deliver a comfortable constant grip and support across all terrain.

The upper is Salomon’s Sensifit, with welded uppers. Like all Salomon shoes I’ve used on the trail, there is a consistent fit and comfort. The welds offer support across the midfoot and abrasion resistance is strong. Sensifit wraps around your foot like a sock, really holding your foot to the sole of the shoe and allowing great breathability through the mesh. Unlike any other Salomon shoe I’ve tested, the Speedcross 5 has a debris skirt/cover, above the tongue and this truly does work. In all honestly, if you didn’t look twice, you wouldn’t realise it was there. Seamless, well executed and for the sake of a few extra grams, include it on more models! 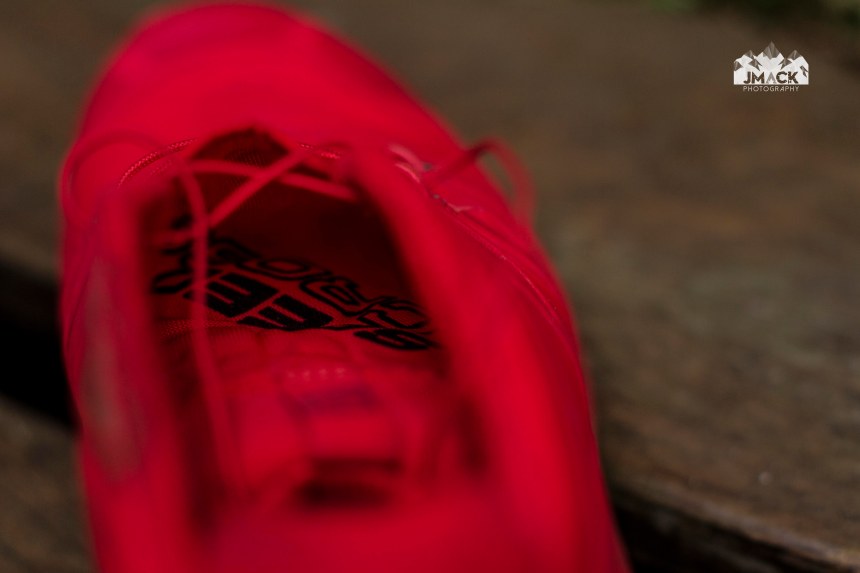 Speedlaces? Well they are speedlaces, they do their job, a fit secure hold/. The lace box/holder/thingy is easier to get the laces in, offers more room and is just as secure as before….. if you’ve never used it, check out the video below as it really should be used on every run!

And now, to my one and only gripe…… the toe box.

I’m sorry to say, for me, it’s just a little bit too narrow. I didn’t feel it on every run, but, it would pinch my little toe to, err, the next toe and a couple of times resulted in a hot spot. This has always been my small frustration with the Speedcross and now having run in other shoes like the Sense Ride, Sense 5 Ultra etc, I am more used to a wider box and this is my preference. So slightly wider Salomon, just for James. 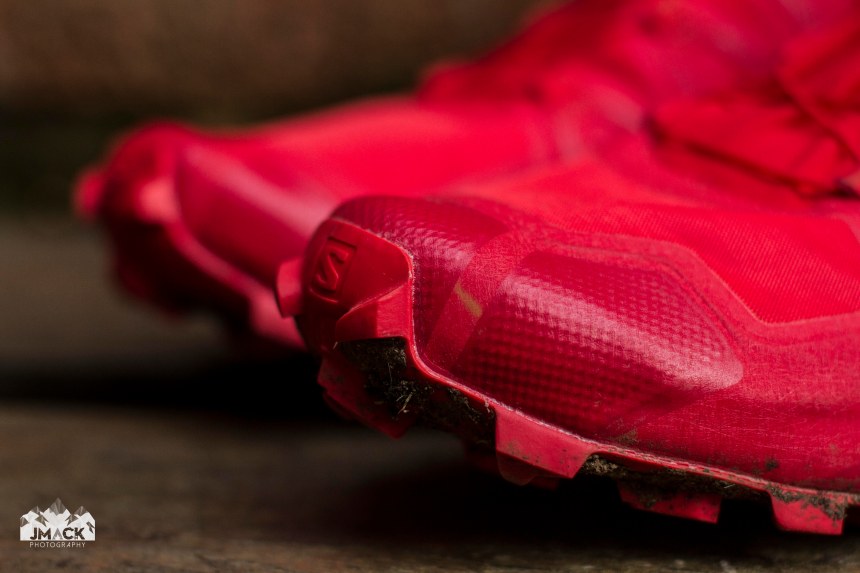 Overall, the Speedcross 5 is a great shoe. It offers most people all they would ever need in one package and is a big step up from the Speedcross 3 and Pro. Yes, personally, I would prefer a wider toe box, but that is the only area I can find personal fault.

To find out more about the Speedcross 5 click HERE