It’s been a while since a new shoe brand was on these pages, so let me introduce you to Topo Athletic. Founded in 2013 in the USA, off the back of 35 years of experience in the running shoe industry, Topo is the creation of Tony Post, wanting to create something less bulky and more natural.

As you will see with the Ultraventure, it isn’t quite what I was expecting. Topo say they intend to deliver “a shoe that allowed runners to access the important benefits of natural running while maintaining some of their favourite features found in traditional running shoes.” They could well be onto something.

Given I’ve spoken about the toe box, we may as well break the norm and start up top. The toe box on the Ultraventure is wider than anything I’ve previously run in. At first I was a little dubious, knowing that I am used to things being a certain way and wanting to make sure I didn’t injure myself in the process. 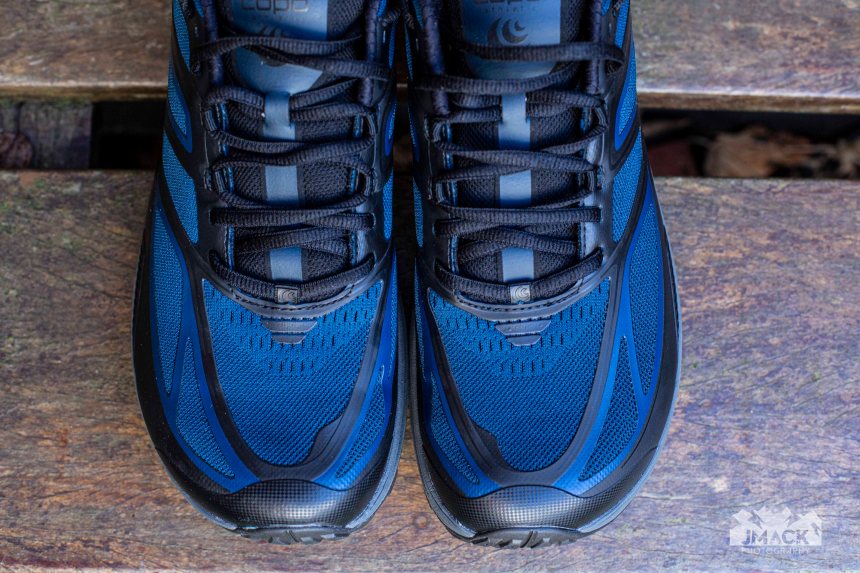 I needn’t have worried. Despite offering room for your little piggies to move around, you won’t be screaming ‘wee wee wee all the way home!‘ There is ample room to move, but you have mid foot security from the laces and welded overlays.

What this provides is a different running sensation to say a traditional road or narrower fit. For me I didn’t get the hot spot on my little toe or foot just beneath it I sometimes get. The upper is made for durability, a tight and fine knit keeps things looking fresh and untorn, without becoming an inferno inside. The rand has the appearance of something you expect to find on a walking shoe, however, it differs in the fact it’s light and pliable.

The heel cup locks you firmly in place, with a further substantial rand/bumper on the rear, for kicking tent pegs in or sliding down greasy slabs when you’ve no other option. At the base of this you’ll see two eyelets designed for Topo Athletic’s Gaitors. Keep every bit of trail debris at bay.

The upper as stated above its comfortable and durable, aided by the extensive protection offered by the rand. For times when you get your feet inevitably wet, there are gills at the front to allow water to drain out that bit easier.

And now for confusion

When I say confusion, it’s my head that is confused. The Ultraventure has a 5mm heel to toe drop, with a 30-25mm stack height. And yet, I don’t feel like Tom Cruise. Yes they are no racing flat, but the closest thing I can think I’ve worn it a Hoka shoe and these feel so far from where they are pushing things.

I wore the Ultraventure in the Chilterns, on local trails and in the Lake District at the Pyllon (a Topo Athlete) XP and from flat dusty trails to rock strewn mountains in unfavourable conditions, I have run feeling like I had a lower profile shoe on. I only bothered checking the stack height when it came to recording the below video. Despite riding high. I felt at ease and ran how I normally would. The 3 piece EVA midsole delivered exceptional comfort and is a good balance of comfort with response. These aren’t marshmallows your feet will sink into and when pivoting will wonder when your foot will stop rolling. Performance Cushing? Is that a term?

Moving down from the midsole to the Vibram outsole. Over the years I’ve not come into contact with many and those I have haven’t set the world alight for me. And yet, people rave about them, athletes get their outsoles switched out at major races and they are a mark of quality.

The XS Trek has offered strong, reliable grip across varied terrain. The only place this came unstuck was on the lower valley fields in the Lakes where a deeper set of lugs and greater spacing would have performed better.

The tread pattern was capable of more than I expected, and those more akin to a walking shoe in initial appearance, tracks true, works well in directional changes and will grip to rock and wet surfaces.

As you can see its not overly aggressive, but provides consistent lugs across the entire outsole.

A surprise. A genuine surprise.

I’m not sure what I was expecting going into the test, but what I certainly wasn’t expecting was something that is as capable on such a wide variety of terrain. It may look cumbersome, when compared to a lot of the mainstream offerings, but don’t let this fool you, the Ultraventure shows how clever thought can harness a natural movement, with comfort, to deliver a product that eats miles with ease.

To find out more about the Topo Athletic Ultraventure – CLICK HERE

To the volunteers
In the land of tall wooden structures, canopies swaying in the turbulence above
More than words
104
I cried
Groups runs are where the funs at
Bright Blue Back
A grand day out with a bunch of epic humans
Volunteering is flipping fun (pun intended)