You don’t see too many of the on this website for good reason. The majority of my time in the outdoors is spent moving fast on my feet (relative to me) or on a bike. But, as I tell a lot of people, I am always happy to slow things down, heck, I’m lazy, a pro at doing nothing. Given recovery is the key to optimising training, you’ve got to be good at slowing the world down. Right?

I like to walk. When I was briefly at uni in 2008, a fresh faced 18 year old, I got into trail/mountain running, when I started running in walking boots and in that four month period completed mountain leader training.

Plus, most of my normal friends. Let’s rephrase that, non running/riding friends, enjoy outdoor spaces at a more leisurely pace on foot and trail running shoes aren’t always the best option.

I got my feet into the Cloudrock at the UK’s Outdoor Trade Show last year, meeting up with the team from On Running and although I only got to walk around the stand, it was an interesting proposition. Utilising their CloudTec® in a boot. The urban explorer and mountain goat in one?

Now, in the video at the bottom of the page I reference Adidas’ Freehiker as its the closest reference point I have and to be clear, these are two very different products.

I took the Cloudrock round my local trails, a mixture of sand, mud and hard packed fire roady stuff, along with round the village, throughout urban trips in the winter, the Lake District and a few other areas. To be transparent, I haven’t been on overnight camps or hikes/walks involving a heavy packs.

The Cloudrock’s USP is the outsole, once again utilising their CloudTec® technology, as found (in varying forms) on the Cloudflow and Cloudventure Peak, both previously reviewed. 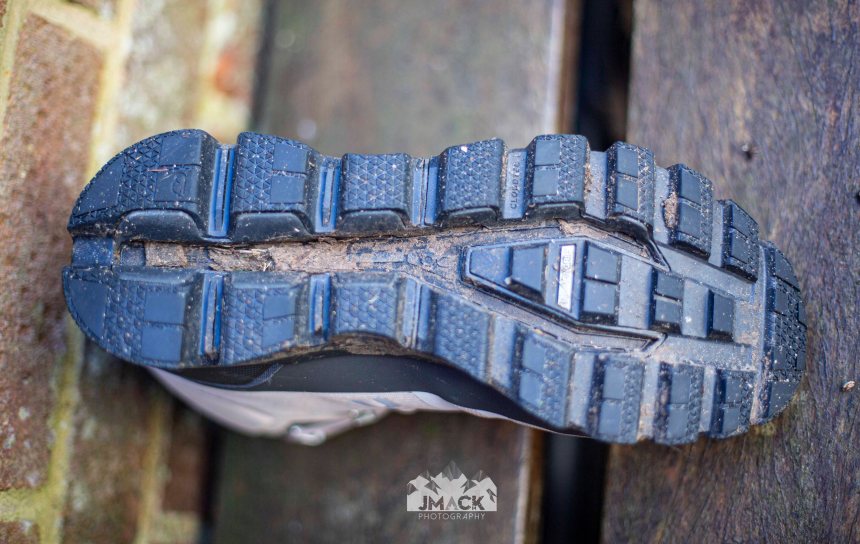 18 cloud pods provide your contact area, which are supported by a central strip with 4 additional lugs. As you can see, not all of the cloud pods have their standard grip pattern, all bar 4 of the pods have a flat edge, providing a greater contact area for rock. Think of it like a technical mountain boot, where thee toe box often has a flat inside edge to help with climbing. 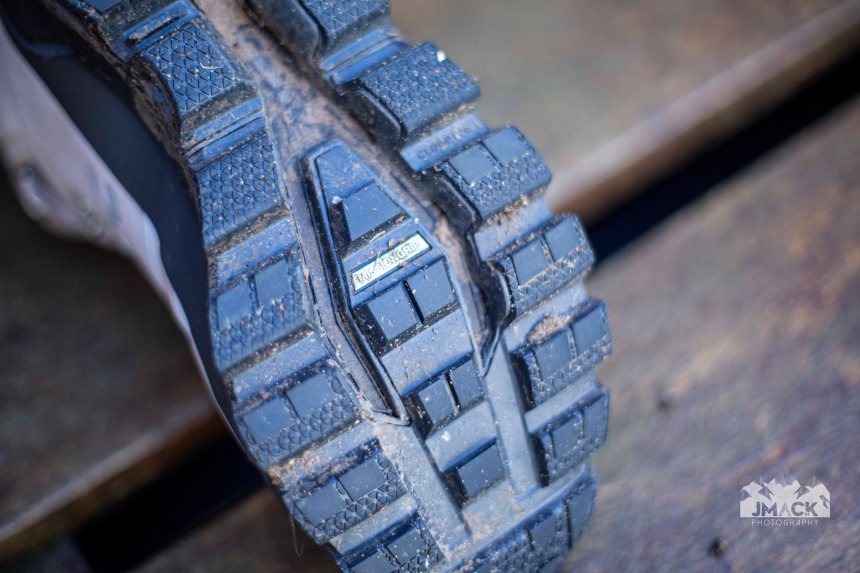 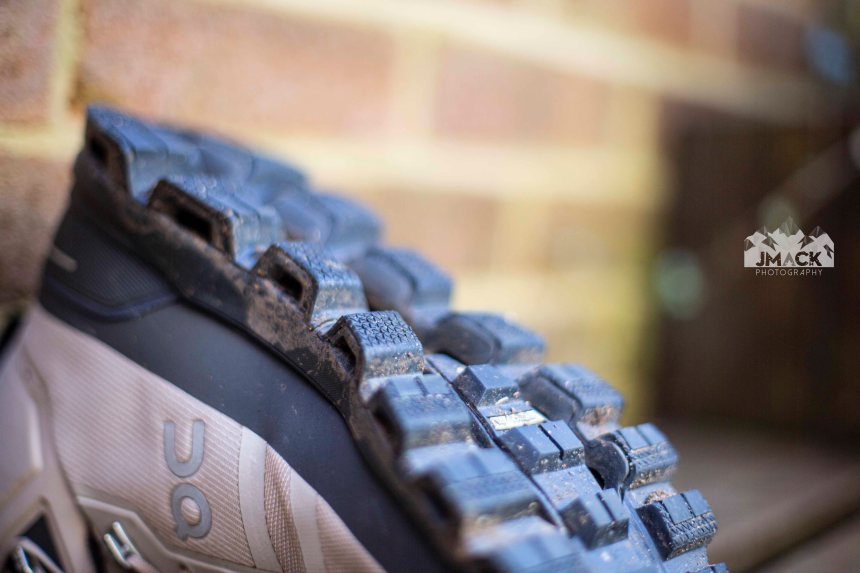 Where these pods differ from their running cousins, is they require a lot more force to comply. Durability is increased as is your ability to apply pressure against terrain, without the pod deforming. Yes, this could be as a negative to some, however, sometimes you do need to more rigid outsole for jumping across rocks, especially if you’re loaded up with additional weight. The MissionGrip™ outsole has solid grip, though I will stick my neck out and say I don’t think its the stickiest compound out there. However, I don’t think the Cloudrock has ultimate grip in mind, given it wants you to move with speed. See, underneath that outsole is their Speedboard™, which as the video shows, dramatically stiffens up the boot and encourages you to keep moving forward. If you’re the type of walker who likes to keep a brisk pace, to move with purpose, this combination is aimed at you. If you like to take 3 steps, take in your surroundings, open up a sandwich, check your instagram likes and repeat in a further 3 steps, you won’t get the most out of the Cloudrock. 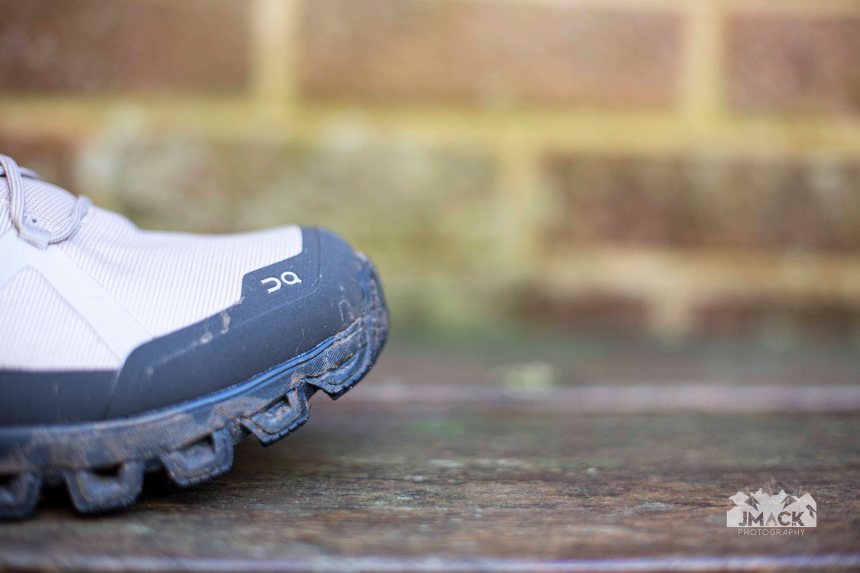 The Cloudrock has one hell of a rand. With the rigidity of the Speedboard, combined with the rand and overall build, you could use this an offensive weapon, it’s got the strength of a pro rock climber with a similar body. All muscle, zero fat. 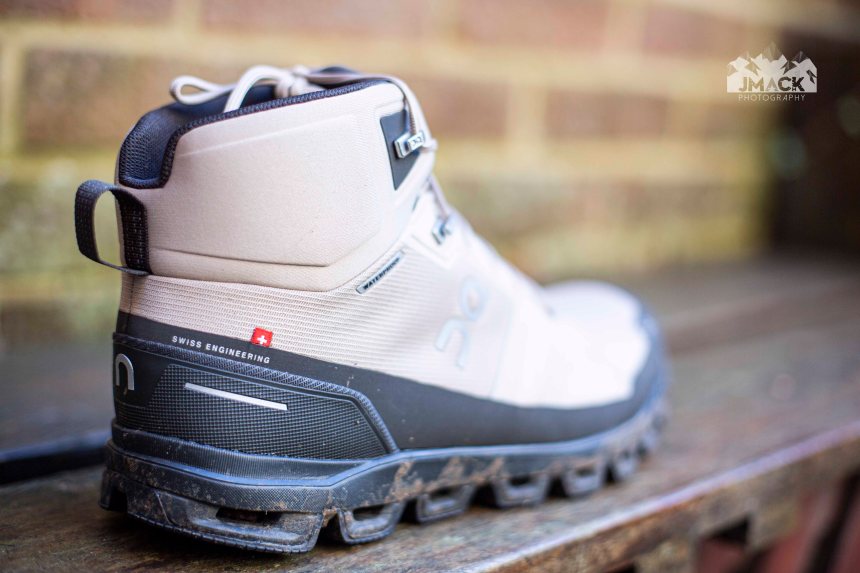 The rand runs down the length of the boot and meets a further reinforced heel cup, with its carbon look weave, that supports you low ankle.

As you can see theres a high collar, with a rear cut away, not to impede your natural motion. I forget when you put on a pair of B rated hiking boots, how you have to adjust your gait, due the additional support on offer around the ankle and achilles. Not the case with the Cloudrock. Free flowing motion has been kept in mind. This foam padded collar wraps around your ankle, keeping you secure and avoiding any slip.

The tongue, with its recessed sides, slips underneath, forming a lock, which provides comfort, without making you walking like your on a parade square, with a drill sergeant screaming ‘eft, ight, eft, ight’ in your ear. 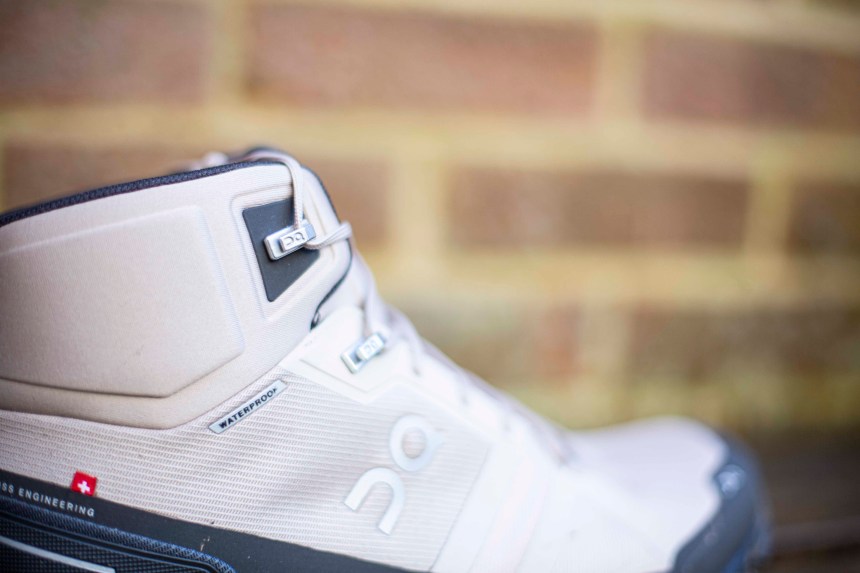 Two options for lacing. You can either utilises them as locking gates or, yes OR, the lower pair have a standard eyelet on the inside (which is how they come out of the box) if you don’t want to have the Cloudrock completely locked down or don’t have the need, ie walking round the city.

It’s a small detail, but a nifty solution.

The upper is made from two different mesh materials and is far more flexible than you expect for a boot. Sandwiched in it is a waterproof and breathable membrane. Yes, these are made for severe misery, otherwise known as a standard British winter, spring, summer and autumn. Yes, these shores, although as I write this during lockdown, how many good weather days have we had?!

Despite their light colour (they also come in a black, a blue or a reddy brown) they don’t feel the impact of terra firma staining hand like the two trainers I’ve reviewed. Due the membrane and weave, they clean a lot easier and you’ve got alternatives if you want to go stealthy or subtly into the wilderness.

Theres a 7mm Heel to Toe drop, so nothing extreme and will support the majority of feet, which suits the intention for getting to move fast.

Overall, for me, On Running’s Clourdrock is best suited for times when you will or may get your feet wet, when you want to move fast but want the protection offered by a boot, rather than a trainer come boot. At under 500g they are light! Dam light for a boot and will not weigh you down when they get inevitably covered in crud and water on the outside. For those wondering about rocks/trail debris in the outsole, it really doesn’t get clogged/lodged in as much as you may think, a handful of times over the months I’ve worn them. Ultimately, like any outsole, this will be determined by the terrain you chose to take them on.

Best for those days when you want to hike fast and cover terrain, the Cloudrock’s a blend of speed and protection, one example where going against the norm pays off.

To find out more about the On Running Cloudrock – CLICK HERE

4 replies to On Running Cloudrock – Reviewed