I received a pair of MUDCLAW 300 at the 3 Peaks Race last year, where I was taking photos with the guys from inov-8. I spent the day running around in them, capturing the race and then put them away, as the majority of my year was taken up riding off road instead. Breaking them out at Christmas, they tore up my local trails before I took them back to the very field I first wore them.

I would run the Yorkshire 3 Peaks.

Picking the Mudclaw 300 for the task in hand was easy. Aggressive lugs, mud clearance and secure upper make this a fell weapon adopted by the masses. Having witnessed countless runners the year before take on the course in Mudclaw and X-Talon, it was the logical choice. Up to this point the furthest I’d run in the shoe was 5 miles at a time, so the 26ish mile route we would take would be a true test. 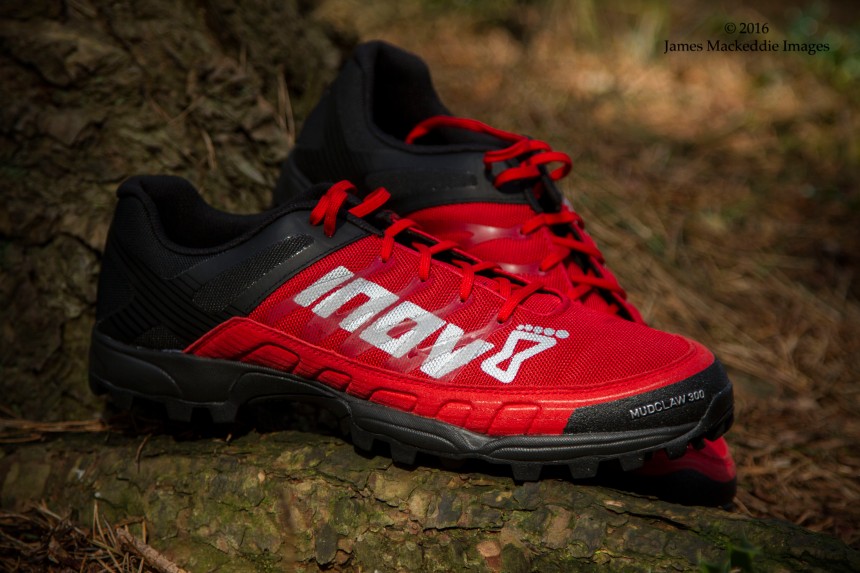 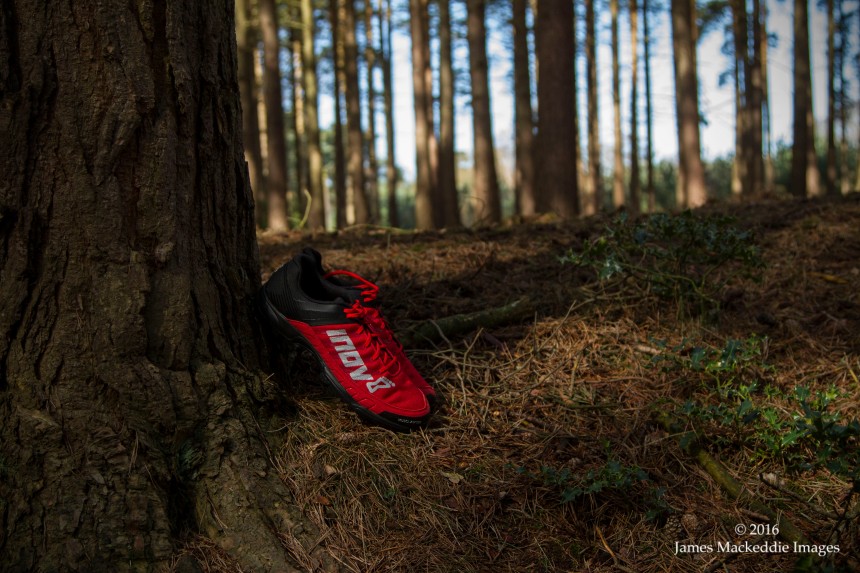 Setting off early, the 3 peaks where covered in a layer of snow neither expected. It would provide a harsh testing ground, combining snow, ice, slush and mud. The first mile or so comprised of tarmac and farm tracks. Scattered with rock, the dry compound gripped well and the eva midsole dampened the shock. You wouldn’t run on the road out of choice, but it handled it with ease.

It was when the tracks ended and the paths and fell land opened up before me, that the test began. The outsole of the Mudclaw is aggressive. It looks like it could be used as a weapon as a last resort. Rugby boots look less intimidating. 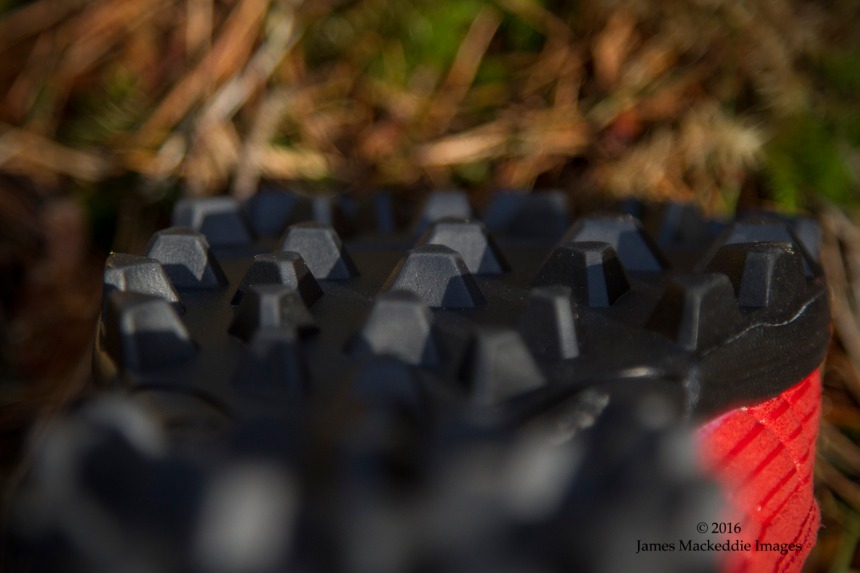 The 8mm lugs are deep and chunky, yet pierce ground like a stiletto. There is no question of whether they will find traction, leaving you confident on technical descents, you will remain in control. 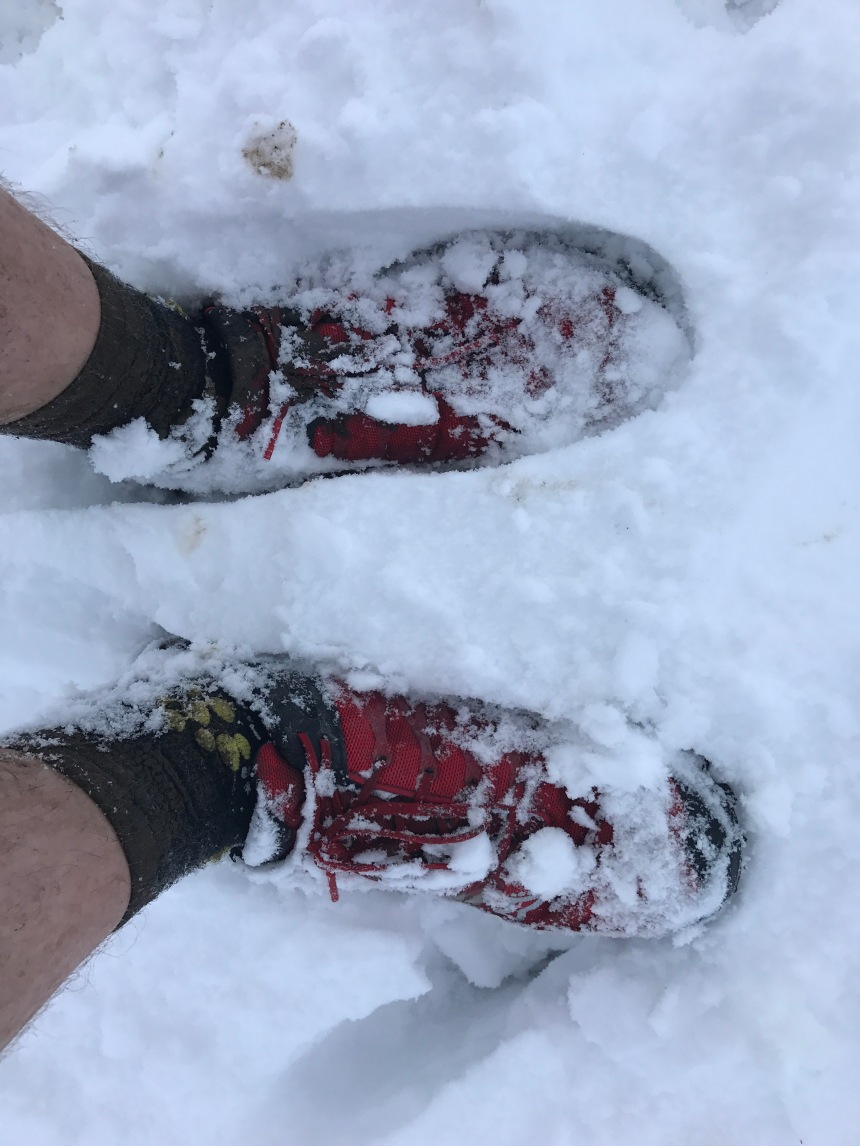 Yet, despite their aggressive credentials, the thing that stands out is there ability to shed crud. It’s all very well having something that can cut through a surface, but if they take it with you, you may as well have ballet shoes in a slurry pit. You aint going no where….. 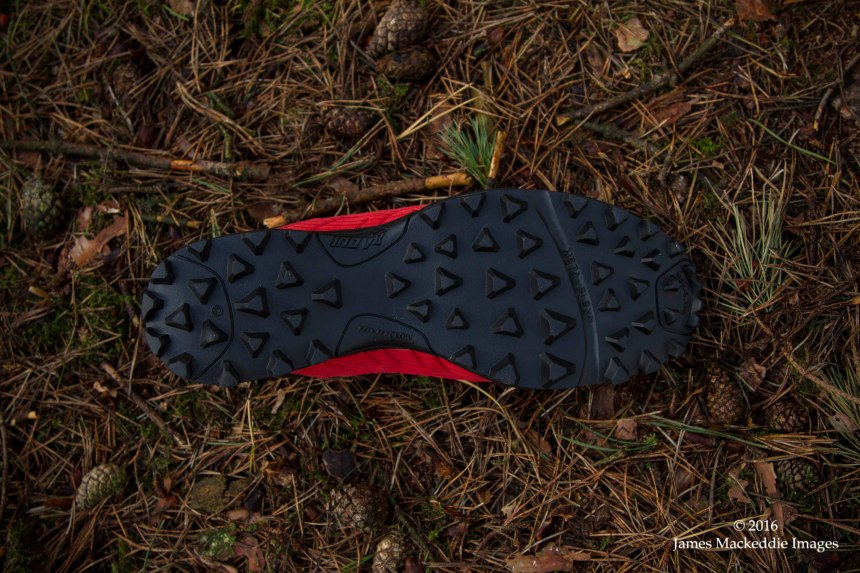 Despite subjecting the mudclaw to ankle deep mud, snow, ice and slush, they self cleaned regardless, to the point outside of sliding now and again, you wouldn’t know there was challenging terrain beneath your feet. The below shot is the very same Mudclaw’s having dried out after the run. No washing involved. 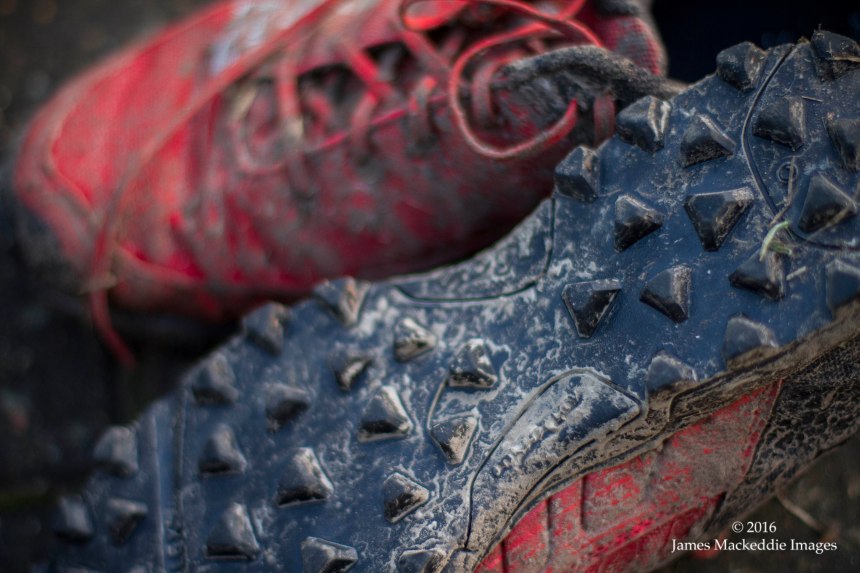 If it wasn’t for the upper being filthy, you wouldn’t know what they had endured.

Self cleaning comes through intelligent lug design (oh yes it exists – look at the variety of mountain bike tyre treads and applications) as well as the compound. inov-8’s rubber blend DUAL-C Sticky grips to everything and I really do mean it! I went over dry rock, wet rock, deep mud, ice, snow, slush, moorland, tarmac….. I’m struggling to think of more. Not once did I find a foot getting ejected from beneath me, which filled my full of confidence. Yes micro spike/mini crampons would have made the icy sections easy, but outside of using something like a ArcticTalon with Tungsten Carbide tips, you’d be hard pushed to run up there without slipping and sliding.

So with around 45 miles put through the outsole, the edges of the lugs have started to round slightly. If you put any shoe through a long run such as the 3 Peaks, there will be some wear and tear. 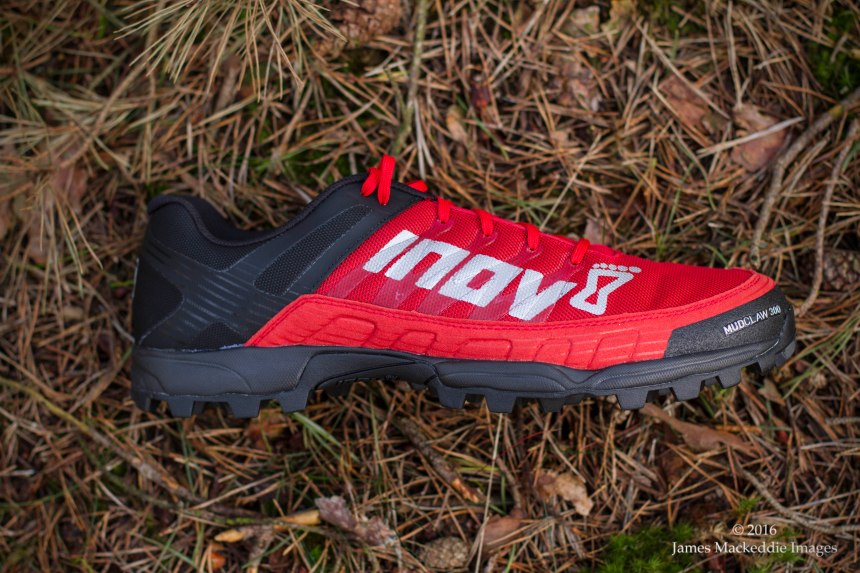 The injected EVA midsole is more than capable of keeping you cushioned and protected when off trail. I wouldn’t want to run a road marathon or predominantly hard packed trails, however off trail it was still comfortable at mile 25, some 5 1/2 hours on the move. If you’re looking for a plush deep midsole, look elsewhere, but remember, if that’s your criteria, are you really looking for an off trail shoe. Given the terrain the Mudclaw eats with ease, you receive a level of cushion from the ground beneath your feet.

For a sturdy shoe with a complete outsole and injected midsole, the Meta-Flex band ensures there is still a level of flexibility thats required for steep ascents and descents. 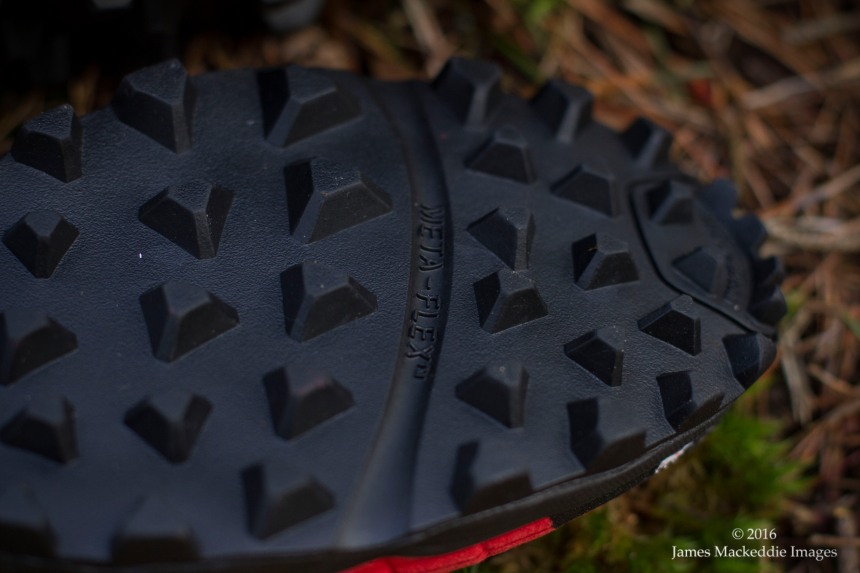 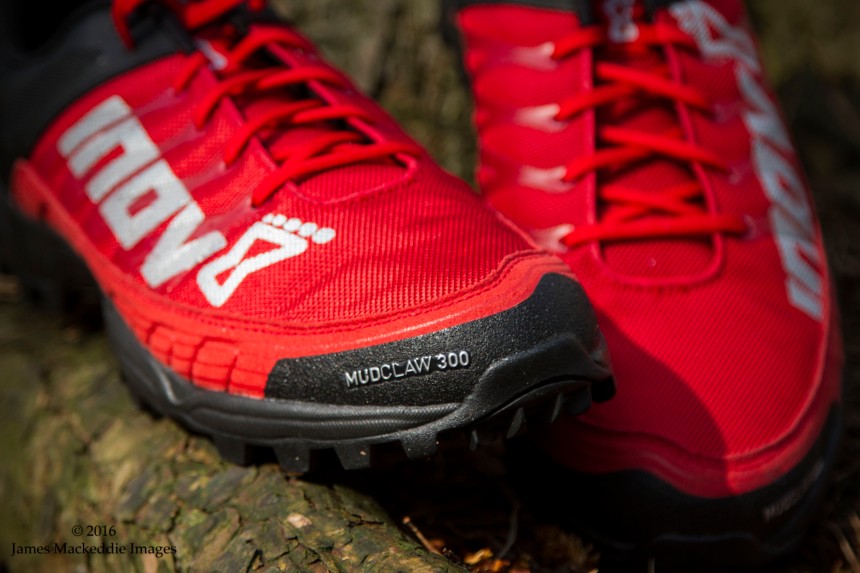 Moving up from the lugs, the Mudclaw has a sizeable rand, with a reinforced rubber toe. Through rocks the rand adds a level of protection, beyond a standard trail shoe. I’ve yet to catch my toes, but it’s reassuring knowing the safeguard is in place.

The upper is protective, durable and keeps out small debris. It’s not a light mesh equivalent of the Trail Talon 275, but in winter the added substance works well. With our climate, given the terrain will often be wet, I can’t see this as an issue. 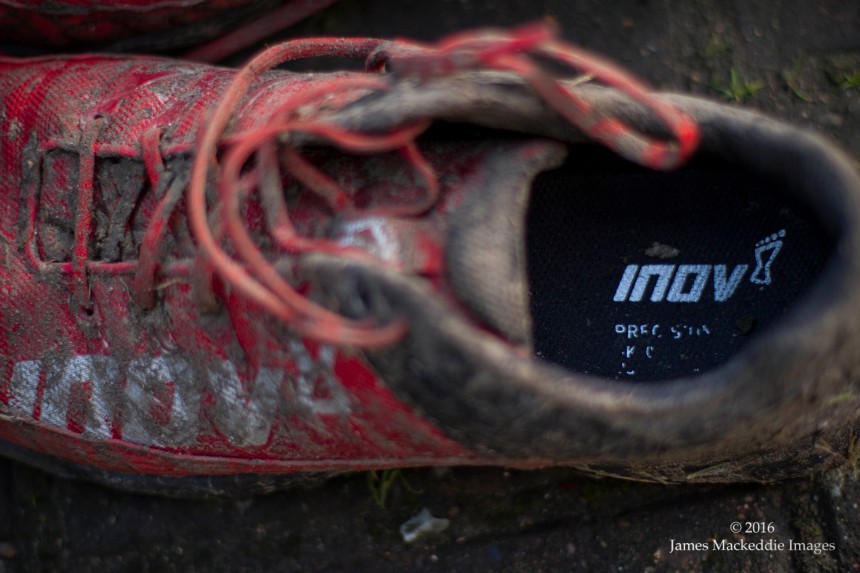 Despite not having a gusseted tongue, debris and small rocks didn’t infiltrate. The thin laces remained locked all day with minimal stretch and when I needed to take a shoe off, came undone easily despite a few hours of wet and muddy running.

The heel drop comes in at 6mm and I had no issues with this throughout the day.

Fit wise, the heel locked in and has been comfortable on all runs, regardless of intensity, terrain or duration. I opted for Precision fit, which is my preference over the Standard fit. I find it comfortable and reassuring on wet, technical runs. Despite having relatively wide feet, I don’t find this too tight. 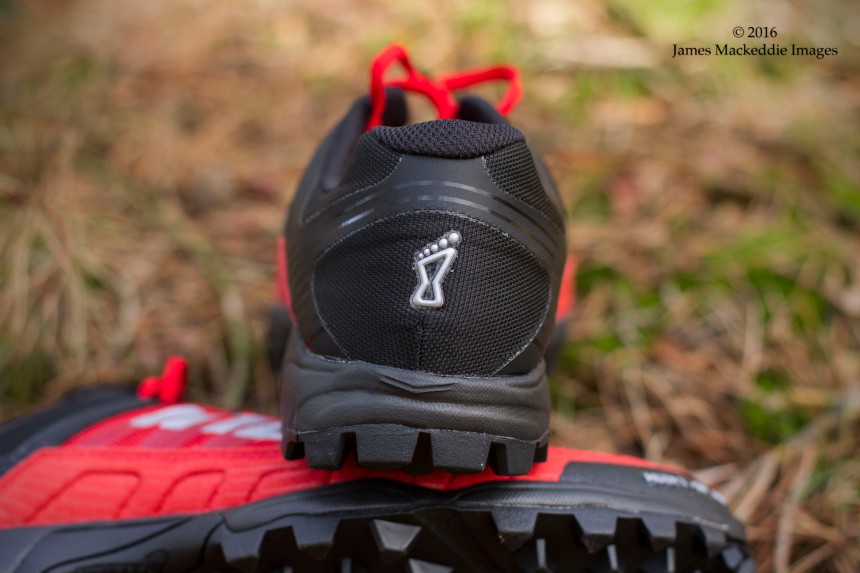 At 300 grams, they aren’t the lightest. For a quick thrash around local trails, I’d be looking for something lighter, but for a big day out they are fine. Even when fully saturated they feel light in comparison to other shoes I’ve run in, a testament to their ability to shed water and the upper fibres ability to release water. 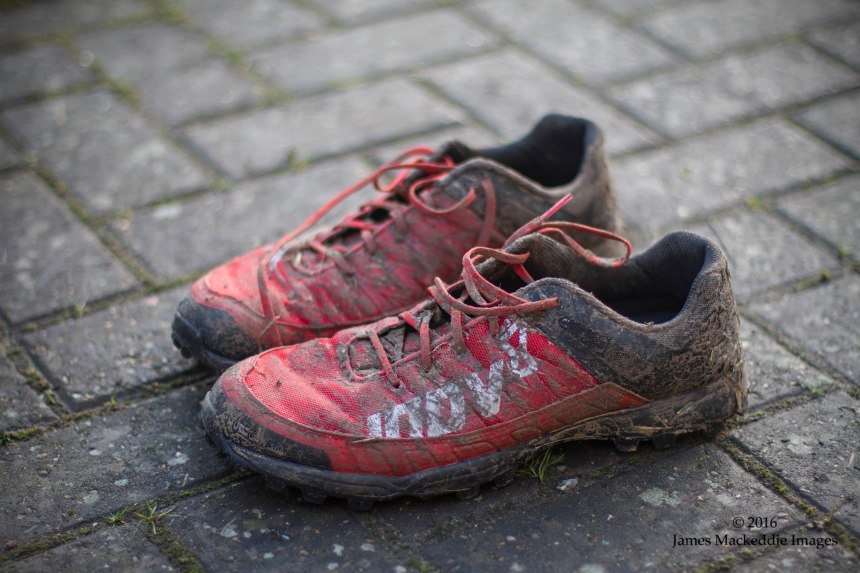 All in all, the inov-8 MUDCLAW 300 are the best off trail shoe I’ve run in. Their aggression is matched by their support, they really were able to perform throughout a big day out. In direct comparison to Salming Elements, they are the clear winner and you can tell inov-8 remain true to their fell running roots. They remain the go to shoes at fell races and now I know why.

@on_running Cloudflow Light, 6mm drop & a speedboard mark these for those looking to crank the pace up & find your flow state I’ve run over 400 miles in the Cloudflow - did I find my flow? Here’s to some dirty shoes, rather than squeaky clean Full review, images & video in the bio link . *images are from the first 50 miles, video is of shoes post 400 miles & theirs an image in the review of t he outsole* . Not a sponsored post or paid advertisement #ad #shoeporn #onrunning
This weeks review theme Shoes With 2 pairs of @inov_8, 2 of @on_running, 1 @salomonrunning & 1 @topoathletic, there’ll be plenty up in the coming days A road shoe, a fell shoe, 3 trail shoes & a boot, something for most appetites & interests 1 review goes live tomorrow - @on_running Cloudflow #shoeporn
#pyllonrunmoment17 We were asked to share our happiest run moment/s from 2017 2017 was the year I started training under Paul. The first time in my life id try to have some consistency & thought in what I was doing, rather then rolling the dice at each race as to whether I’d even finish. The plan was to build for Lakeland 50, I’d run it the year before in a pretty slow time & could see the benefits of training. Unfortunately I had the worst cold of my life when attempting my first taper & never started.. though the run with Rupert (@mountainfuel_uk) in the following week in the Borrowdale valley put a smile on my face So instead here is a selection of random photos from a few of the races/events I shot photos at that year Swipe 📱👈🏻 . #teampyllon #capturingmemories
Never been one for birthdays but I’ll be remembering my 30th I guess living on your own has its own set of challenges in a lockdown, as you are your only face to face company & worst enemy wrapped up in one I got my daily fresh air on Saturday, running up/down a midget hill for 45 minutes before slipping back into my isolation chamber. Right now I’m truly grateful I don’t live in a city, i’d be going off the rails Having been working from home for two weeks before the weekend & now on leave, making sure every day has some form of purpose, set of goals & structure is paramount. For those who follow my reviews, there’s a lot coming out in the next few weeks on my website Forever grateful for everyone reaching out to check I’m doing ok So here’s to being 30 Keep safe, keep active, keep talking, keep being yourselves #stillakidatheart
Going In @trekbikes Factory Racing follows the Enduro, DH & XC teams over the 2019 season I was lucky enough to watch the global premiere at @kendalmountainfestival last November & Trek have now released this for everyone on @redbullbike TV 90 minutes of escapism, highs, lows & shenanigans Link in bio #abreakfromreality #kendalmountainfestival
Looking forward to big days in the mountains - whether running, racing or capturing others 📸 . . . #returntothemountains #pushyourlimits #throwback
Happy Birthday to the legend that is @grahamojoe Missing the 5am breakfast chats from XPs, energy he emits & proud of being unashamedly himself A true sensei #birthdayboy #teampyllon
The Pentlands provided a break, a final piece of mental clarity from the ever evolving situation that finds us relinquishing our social freedoms in order for a greater future I’m sure there are some who will deem the above to reckless. Thankfully unlike many areas, the Petlands were quiet, very quiet - few people on the southern peaks, the north empty. Social distancing observed, the recommendations of Mountain Rescue observed & followed Races, events, group runs & rides - they’re a privilege, not a right. We have them because of decisions that were made by countless generations before us. I love all those things, they’ve been my work & social life for the past decade, but they aren’t everything. I’ve many friends who are race directors, media, involved directly who are all being hit hard financially, I want to support them where I can I struggled last week, working from home. Changing attitudes, habits & routines takes time, but they can and will be done. I live on my own, I’m single & my parents are self isolating due to my fathers medical conditions (they also spent a week in Spain when it went into lockdown). I haven’t seen them since January and now won’t till July earliest I never talk about her, but my younger sisters a nurse. Major gratitude for all frontline services & those involved both directly & indirectly Utilising a small space as an office, gym, place to unwind & stay connected isn’t easy, but has to be done Follow @ayrshiremtb for @gozwift / @elite_cycling tips & tricks for those who want to turbo these weeks away Im always here for a chat, keeping mentally well is paramount moving forward
Be more Bob @ultrarunbob . Not all superheroes wear capes #bemorebob #teampyllon #pyllonxp