Last year I was stoked to find out my friends at Trash Free Trails were headed to Kendal Mountain Festival where I was already due to be.

Little did I know their scale of involvement at the festival.

When it comes to Kendal I live in a little bubble, focusing for the most part of endurance/running sessions and catching up with friends and industry folk across the weekend. Over the years I’ve caught some epic nights and moments, but I do have a habit on focusing solely on my output and this year I wanted to change things up. Take in the greater spectacle of the festival, taste more of what it had to offer and have more diverse memories.

With Dom, Ben and the TFT on hand, that was guaranteed.

Walking into Basecamp I had the shock of my life. Ok, it wasn’t THAT big, but I was lost for words. For the previous few weeks I’d seen discussions on the WhatsApp groups, but there was no context. I got that when I first laid eyes on the display in-front of me. It was huge! 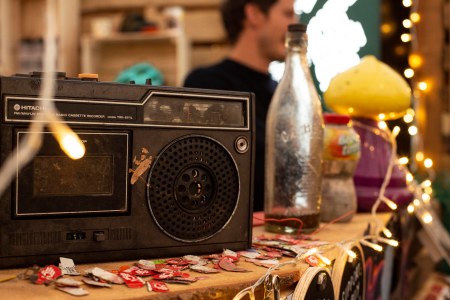 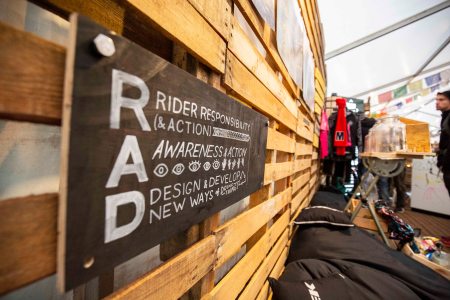 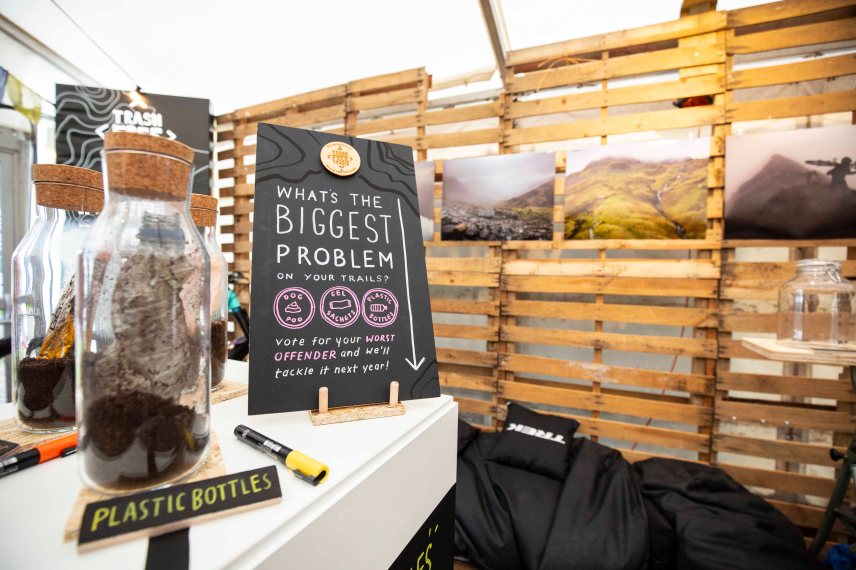 The pallet walls had been transformed by Beth Breedon into a space which told countless stories and encouraged all who viewed it to interact, leaving their mark and opinion.

A large Lightbox commemorating the Spring Trail Clean Tour stood proud, highlighting the locations of the tour and the overall trash collected and documented from the trail. From litter collected on Helvellyn and Grizedale leading up to Kendal, photography of this action captured by the uber talented Sam Needham – check out his film The Postman, which premiered at Bike Night – to momentos of other cleans around the UK, we wanted everyone to see the raw effects we as trail users have on the environment. 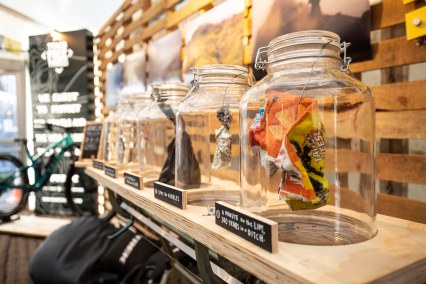 As I mentioned, interaction was key and a poll was held for what was worse in everyones opinion – gel wrappers, dog poo bags or plastic bottles…… 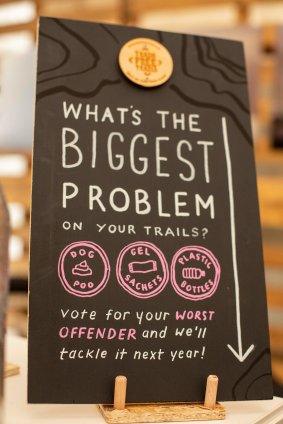 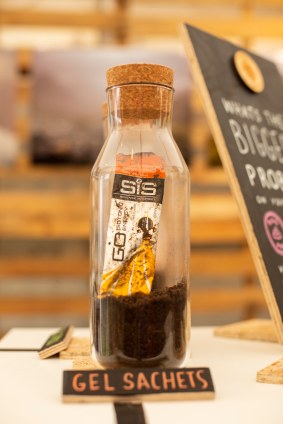 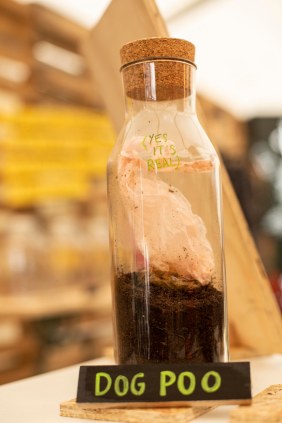 Packaged poo was leading the charge

The irony when it is the only natural product of the 3, but preserved by our actions.

Most of all, the aim was not to point fingers, alienate and accuse. The trails are for everyone, we all share the same rights to walk, hike, run, ride and enjoy our green spaces.

We want everyone to feel they can get involved, encouraging their friends, family and associates to take responsibility for their area and overtime, alter our conditioned actions. And that’s the message, show this doesn’t need to be a chore, it doesn’t spoil your experience, it only enhances it.

To build on this, Dom spoke on two occasions, first on the Basecamp Stage and secondly on the main stage at Bike Night. He may say otherwise, but he was in his element; speaker, showman and man of the people. 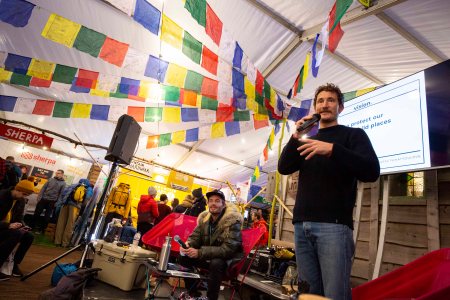 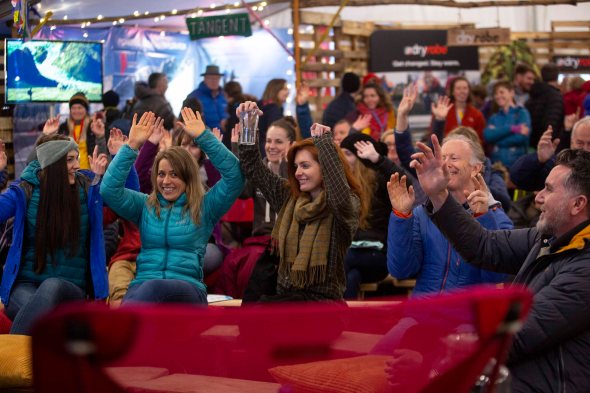 Both times engaging with the audience and accepting publicly that we aren’t the complete solution to the problem. Infrastructure, funding and public perceptions all need to change to reach our ambitions.

It isn’t a reason to stop.

It’s fuel to propel us forward and for you all to join in. 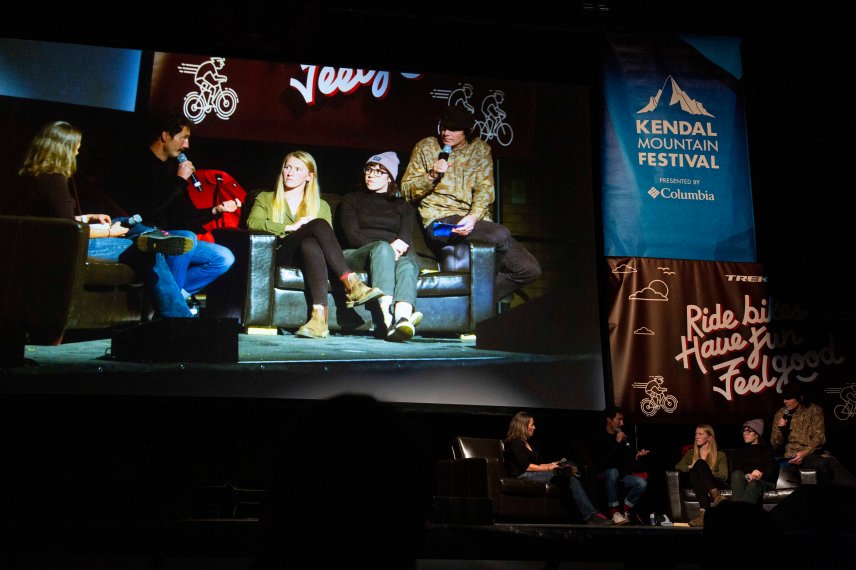 Sat on arguably the biggest stage of Kendal Mountain Festival, on the biggest night, Rob Warner, Tracey Moseley, Saskia Dugon and Monet Adams either side, it shows the festival’s appetite for activism and acknowledging we need to take action.

To round the Sunday off, where many were seen shuffling around, feeling the effects of Saturday’s legendary parties, a flash clean was undertaken around the basecamp area, seeing if people were utilising the recycling bins provided properly and also for any litter thrown onto the ground.

Cigarette butts would prove to be numerous, and though tiny, pack a real punch in their ability to pollute water sources and the time they require to degrade.

🤬 – BUTT HEADS – 🤬 . Sadly we collected these in just a 5 minute #TRASHMOB at @kendalmountainfestival. . Despite rising awareness about the impacts of dropping plastic pollution on our streets, seas and trails, we still find thousands of cigarette butts wherever we go. . Given that each butt contains enough toxins to contaminate 8 litres of water, 12,000 to 15,000 individual plastic fibres & can take up to 10 years to decompose – these small discarded filters pack a serious toxic punch to our environment. . And there's over 4 TRILLION of them out there 🏞️😭 . #buttfreetrails #cigfreestreets #nobuttsonthebeach #trashfreetrails #cigarettebutts #dontbeabutthead . 📖 & 📸 by A-TEAMEer @jamesmackeddie ✊💚 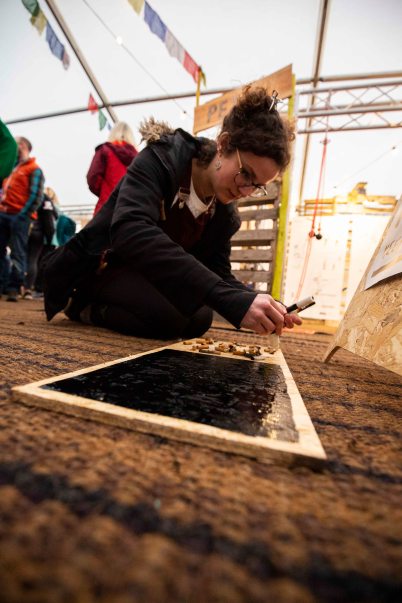 But, something was greater than hanging out with and watching my fellow Trash Free Trails amigos dance at the silent disco, see our movement get airtime on the main stage and the support Trek provided to make this happen.

My highlight was talking to you. You the people who came over to chat at basecamp and those of you reading this, unaware of who we are. Those conversations about the action you are already taking or the action you wish to take, inspires me and the other members to aim high, follow our passion and make Trash Free Trails into a platform you can all get involved with. It’s humbling to hear how many local communities are already cleaning their parks and trail networks, how the new generations are insisting on picking up what others are happy to drop and that their passion clear to see.

Thank you all and I look forward to seeing you on the trails this year.