The Endurance Session at Kendal Mountain Festival was a late entry to my calendar this year, I was in talks with the organisers, when they said you need to go to it, we’ve yet to release it, but it’ll be great……

Held in the town hall, the day after the Adidas Terrex 10km, I had no idea what to expect.  I’d seen Huw on the SAS tv show years before, he didn’t say much, but slogged through what ever lay in his path. I’m fortunate to call Nicky a friend and this would be the 3rd time we’d bumped into each other over the weekend and though I’d been at events with Tom, I’d never said hello (those who know me are aware I’m criminally bad at intruding myself, but, unfortunately, I don’t shut up from then on) and Fernanda was an enigma. Someone I had watched for years on race coverage, yet never crossed paths.

Right now, you’re probably wondering how these 4 very different personalities and stories combine into one of the most memorable moments of my 7 years of Kendal..? One word.

For someone who nodded and got on with the task, in those brief moments on episodes broadcast across the nation, I therefore thought I knew Huw better than he did himself, through the power of being an armchair judge, psychologist and character expert. We’re all qualified I hear you cry. 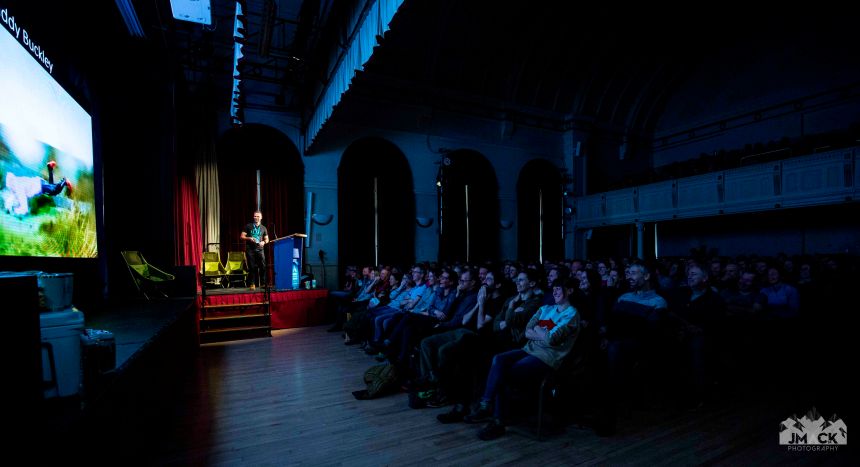 I may have got things slightly wrong…

For anyone who attended, you may be aware Huw has presentee a show on S4C, around the psychology and physiology of endurance. His presenting skills translated to the stage seamlessly, with precision timing and hilarious analogies, that translated the elite trios accomplishments into real world scenarios. Furthermore, watching Huw face plant on his Paddy Buckley repeatedly over the course of the session, in ever more subtle ways, kept the audience laughing.

“I was a broken rugby player in Chamonix on holiday. Me and my cousin were in pub looking, as you do, at the Mont Blanc. It was huge, it was the biggest thing I’d ever seen and I looked at my cousin and he smiled.”

“we overhead a guide say “anyone can climb Mont Blanc if the weather is good,” “that’s not a Puerto Rican ascent, it’s my French one.” I should probably explain at this point if the name wasn’t a hint, Huw is Welsh. “4 days later we were on the summit of Mont Blanc, we had no idea what we were doing,” “I know it looks reckless and it really was, but we didn’t take it lightly. We knew people died on that thing every year, so we studied up. We didn’t have money for a guide, so we studied up. 15 minutes on Youtube ‘how do you tie crampons?”

And so set a series of stories that explained the relationship between the key aspects of Endurance – Anything is possible, Fear, Don’t challenge the internet, hydration, chose your battles, keep your head and efficiency.

Using a series of anecdotes, images and videos of Huw in at the deep end, learning his lessons.

Now on to the sharp end of the race

From an unknown ultra distance athlete in 2017 to the forefront of British running, from trail to ultra and even the GB XC team, winning a team Gold in the process, right now Tom is one of the hottest prospects in GB running, with multiple GB jerseys and elite podiums to his name. We got to see the World Premiere of his new film “Process not Outcome” documenting his Western States 100 podium and how he came to be an elite runner.

Prior to heading to Western States, Tom spent 2 months in Ethiopia training with runners who ran a 12 minute faster marathon. The process and planning is key to Tom’s strategy, before he headed out, he wrote down and mapped every climb on the Western States course, in order to practice these in training.

Marathon Des Sables – On the back of a drunken bet and not running more than a park run, Tom went out to beat his army mates who had come in the top 300. Utilising heat training, there was no coach, but at the time being an officer in the British Army, planning the finer details came naturally. 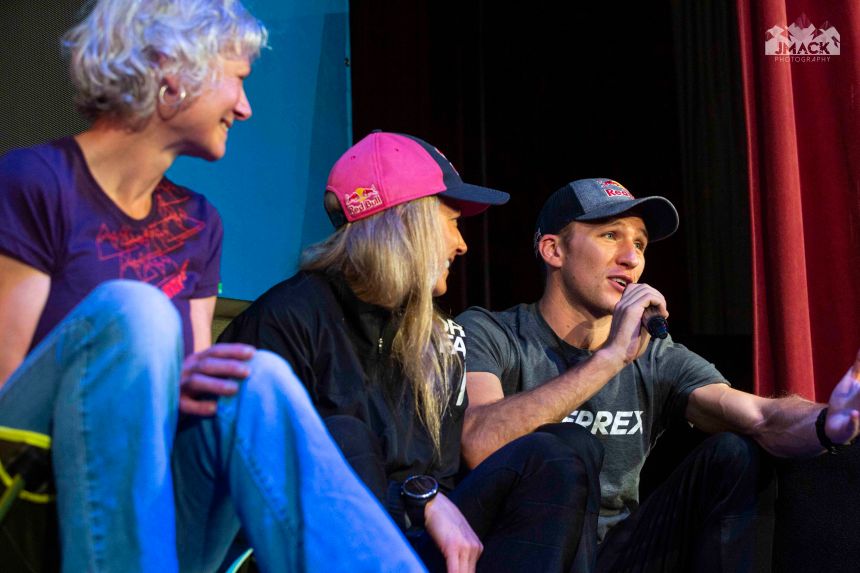 CCC – You don’t need to hard from the beginning, at the half way stage Tom was 7th and 18 minutes behind the leader. At 92/101km Tom caught the leader on the final climb. “In endurance sport you do need a lot of luck,” “the harder you work, the luckier you seem to find yourself.”

With a list of races, rounds and double rounds (current record holder of the Double Bob Graham, Paddy Buckley & Ramsay Rounds) to her name that a running club would struggle to tally up collectively, it’s hard to quantify quite how much Nicky has achieved and continues to – you can add winning the Montane Cheviot Goat Ultra this weekend, while placing 15th overall. 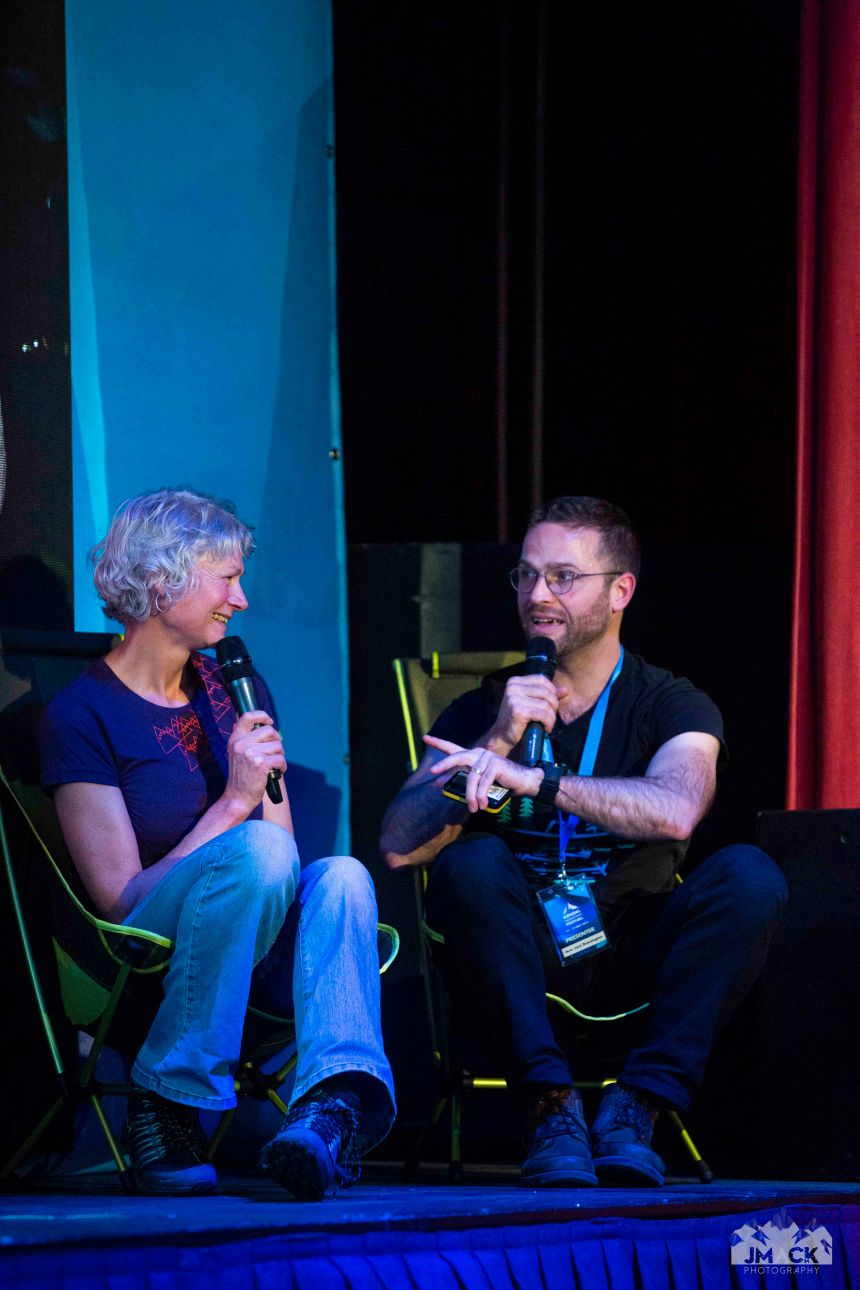 The session kicked off with a glimpse at her latest movie, Last Woman Standing, shot in conjunction with inov-8 and Summit Fever Media, at this years Barkley Marathons. Lucky for you, it’s now released in full.

“Its supposed to be 100 miles, 5 loops of about 20 miles, you’re not allowed to use a GPS, so no one knows the real distance, Laz makes it all up“

“He (Laz) writes everything in riddles, you don’t know if you’ve got answers or more questions.”

What’s the difference between a single and double round? “The biggest difference is mentally“ 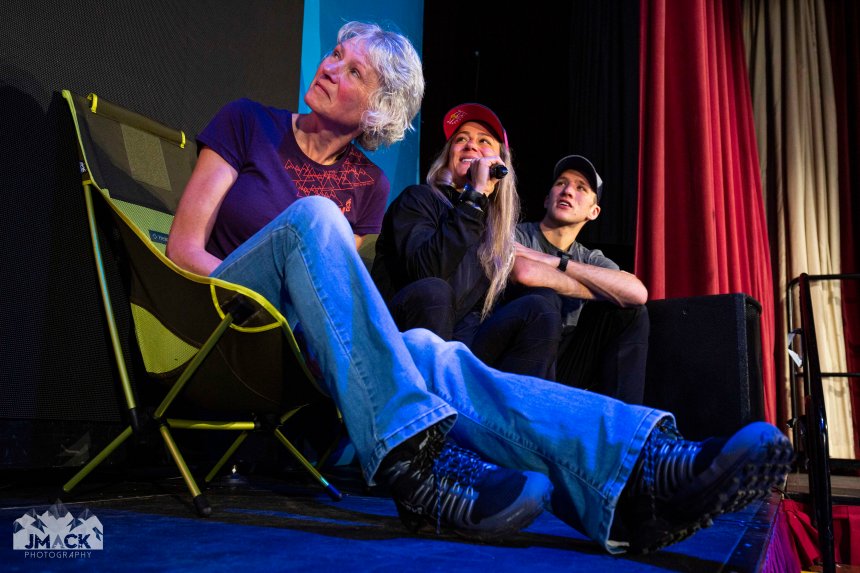 Which is the hardest of the 3 rounds? “I suffered more on the Ramsey, as it was so hot. I had strength in my legs but I couldn’t breath properly.” “such a frustrating feeling when you know you need to go faster, but when you try you cant breath, so you have to reign it in.”

“I slowed down during the day because it was so hot, hoping that when it cooled down at night, I would then be able to pick up the speed. Then it got foggy and claggy at night, and we were navigating, so I couldn’t pick up speed.”

In reference to a question regarding her breast cancer in 2006, do you feel mentally stronger as a result “I think I found out how strong I was, it was already there, but until something challenges you, you don’t know how you will be effected by it.” “I think we are all strong.”

Huw’s interview started with Fernanda revealing she hasn’t watched tv in 14 years to Huw’s response of “do you realise I have a tv series out?” which was met by laughter and  applause from the crowd.

A professional ultra runner for 10 years – “ultra races are super tough, along with the environments“. Fernanda takes a lot of her mental strength from her childhood training and competing in Brazilian Jujitsu – “A huge philosophy of values, of compassion, to be strong, not give up and look out for others.”

After 10 years on the Ultra Trail World Tour, Fernanda is now doing 1-2 big projects a year, with the aim to “run high.” Fernanda needs to learn more for future projects, to develop her skills, to Huw’s “you don’t, watch Youtube.”

& then the games began

Room 101 – what do you want to send to hell from the world of endurance racing?

No audience member will willingly throw their hand into the air with purpose again, when asked if they have run a half marathon or less … as two entries to the Penllyn Ultras for two unsuspecting winners. Jubilation mixed with terror were worn on the faces of the duo of ultra virgins. 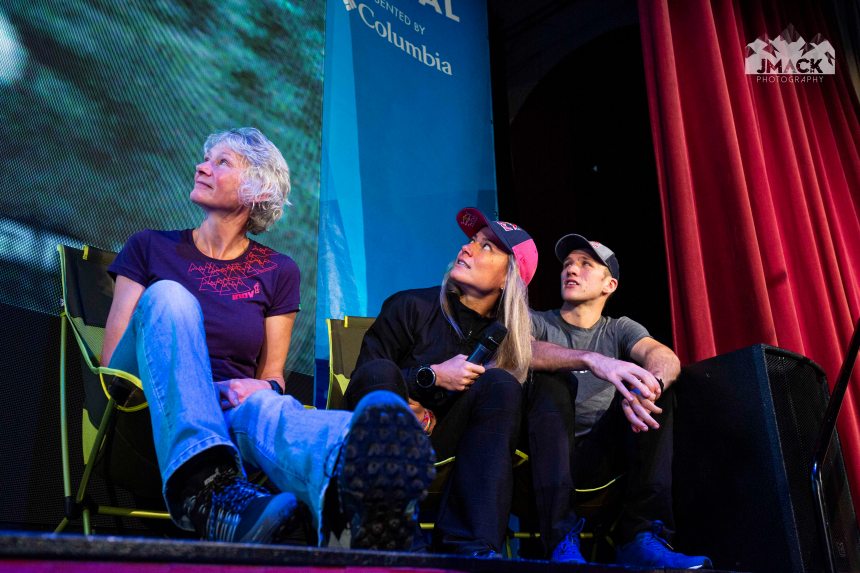 Live Audience, giant cards and a phrase…. what could go wrong.

All in all, the Endurance Session ended being up there with the Fell Running Session (this years coming soon) as hilarious and informative in equal parts. You don’t have to be a runner or a die hard to fan to understand the physical and mental dedication required to push yourself to these levels and for anyone who needed it translating to you and I, mere mortals, Huw won the audience with his show, which kept the speakers on edge… What they thought was coming next, wasn’t always what was projected 20 feet in the air.

Under the humour and relaxed conversations was a theme of mental toughness, agility and overall, awareness by all Tom, Nicky, Fernanda and Huw, that the mind is crucial to endurance pursuits and races. It doesn’t matter whether you aiming to set a course record, take the win, break onto the podium or complete the course, the mass inside your skull determines the outcome, much more than your body.