It was too good to last

The past weeks have been windy. Wildly windy. Wind that could inflate your jacket like a hot air ballon, decimate your breathing efficiency and fold you in half like a hospital pass in rugby.

Whether in the Lakes at the Pyllon XP or on flat, level ground around Bedfordshire, it has been relentless, fanatically overpowering senses, increasing exertion levels dramatically and frustrating split times… if you obsess over them.

Some how, for the most part, things have remained dry. The seasonal deluges have passed either in office hours or been absent. Ground water abundant, but short of feet getting saturated in murky puddles, all has remained relatively dry.

That was until yesterday

I was out on my long run, 17 miles of minimal undulation on road paths, slap bang on the Bedfordshire/Buckinghamshire border. It was windy once more, but the forecast showed I should be safe. Merino long sleeve and gloves to keep off that cruel chill that still cuts through exposed skin in March, I was happy with my choices. Right up to the 11 mile marker, when large spots of precipitation started to make their presence felt. My sunglasses, which till now had been more to keep the wind off my eyes (one of them isn’t so good) now had a moving mosaic, a live art piece merging across the lens.

In the direction I was about to travel the sky was grey, buildings and trees were becoming obscured.

A band of rain was about to hit

I knew it would be cold, but my immediate thoughts were of my Sony RX100, in my race vest, no waterproof case, at the mercy of elements. My arm covered the camera in a token gesture to save it, as the winds increased dramatically.

Rain hammered into my face, like lead being shot from a mini gun, precision not an issue with the sheer quantity of projectiles getting fired down range.

Cars drove past, probably wondering why on earth a man in 5 inch shorts and sunglasses, was running into a storm.

The torrent of water must have lasted all of 10 minutes, but it felt relentless, refusing to ease up until it had fully expired. Mind invigorated, clothing soaked through, camera……. alive.

Its what I used to take the photo. 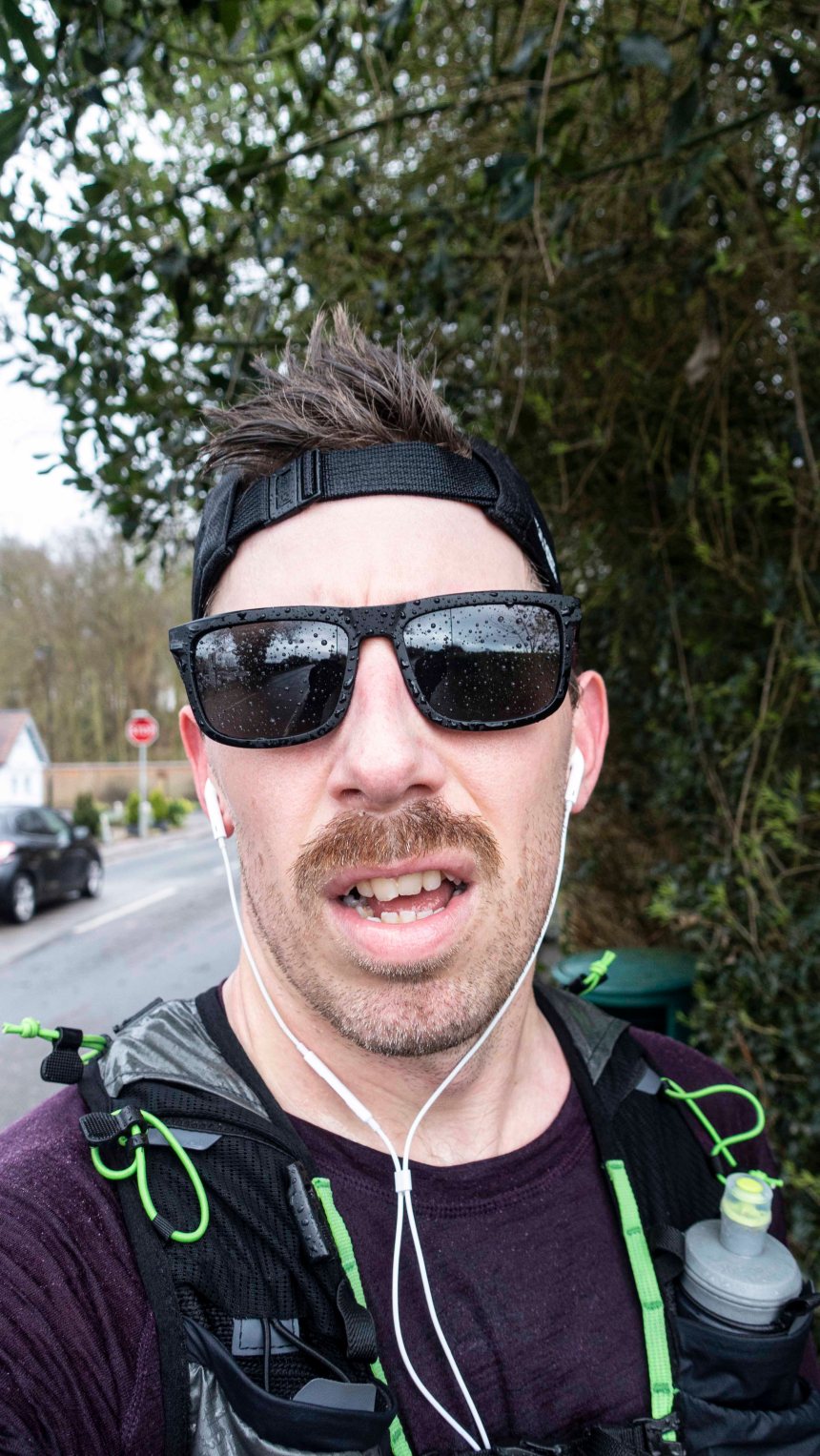 For Spring is a wonderful season. Life in both flora and fauna returns, daylight provides a much needed break from head torch powered runs and renewed energy is palpable.

But don’t forget your jacket. The last time I got caught out, I got ill. Big time!

Hanging problems
Horses & Chains
Clearing deadfall with Mike, John & Matt
To the volunteers
In the land of tall wooden structures, canopies swaying in the turbulence above
More than words
104
I cried
Groups runs are where the funs at